Sergio Aguero disputed a throw-in decision that went against him and after arguing his case with Sian Massey-Ellis, he briefly put his arm around her shoulder as she began to walk away. 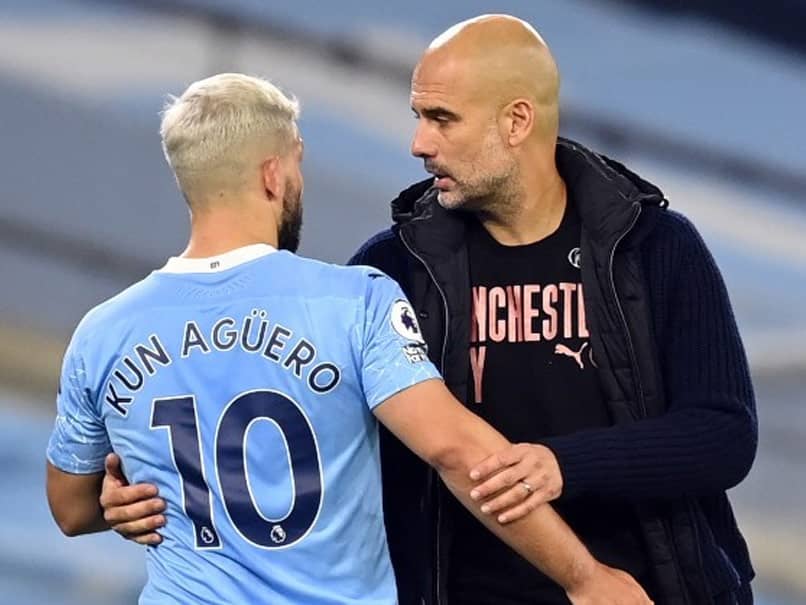 Manchester City manager Pep Guardiola has once again come to the defence of Sergio Aguero.© AFP

Manchester City manager Pep Guardiola has once again come to the defence of Sergio Aguero, saying he "knew his intention" after Gary Neville urged the striker to apologise for putting his arm on the shoulder of female assistant referee Sian Massey-Ellis. City's 1-0 win at home to Arsenal last Saturday was overshadowed by an incident early in the second half when Aguero disputed a throw-in decision that went against him. After arguing his case with Massey-Ellis, Aguero briefly put his arm around her shoulder as she began to walk away.

The Argentine star was widely criticised on social media and  Manchester United great turned pundit Neville told CNN: "I think (he) would be best served by apologising."

After reviewing the incident, the Football Association was satisfied that match officials did not believe any formal action was necessary.

Guardiola defended Aguero shortly after the game as "the nicest person I ever met in my life".

Asked on Friday if the forward ought, on reflection to apologise, the City boss insisted: "I know the intention from Sergio.

"He put his hands in a normal way, what he does many times to me, on and off the pitch, or when I hug him when there has been a substitution, or when sometimes he touches the referees as well."

Guardiola added: "I think it was normal, because I know perfectly Sergio, who has been an incredible, huge star of world football and is one of the most humble and nicest people I ever met.

"The important (thing) is the intention, and the intention was to talk to her in a normal way. And I'm pretty sure -- I didn't speak to Sergio about this -- if she felt bad, he would apologise without a problem."

Sergio Aguero Pep Guardiola English Premier League Football
Get the latest updates on IPL 2021, IPL Points Table , IPL Schedule 2021 , live score . Like us on Facebook or follow us on Twitter for more sports updates. You can also download the NDTV Cricket app for Android or iOS.