England cricket coach says his side's behaviour during the recent tour of India was not "up to scratch" as it overdid the aggression which was against team policy. 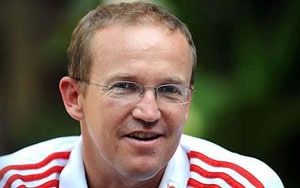 England cricket coach says his side's behaviour during the recent tour of India was not "up to scratch" as it overdid the aggression which was against team policy.

England's team lost all five matches of the ODI tour and came in for sharp criticism for its aggressive on-field behaviour.

"Yes we overdid it, definitely. We got that balance wrong and it will be addressed. They have driven each other on and driven their standards higher and that's part of the strength of the group. But in this series we got it wrong," Flower told 'The Daily Mail'.

"I heard some of our younger players say that the sledging was an attempt to jog Indian players out of their comfort zone or something equally strange. That is not the case. That was not a team policy at all. We should take our role as role models seriously and I don't think our behaviour was up to scratch," he added.

Flower was once again critical of Graeme Swann, who made some unsavoury remarks about teammate Kevin Pietersen in his autobiography.

"The Swann book wasn't ideal. If we can avoid situations like that they're best avoided because we pretty much live together for a large chunk of the year. For instance in 2012 we are going to be away from our own homes for 240-plus nights. When you are living together like that as a group you're not going to agree on everything but there needs to be a degree of harmony and honesty," Flower said.

"That situation arose and I think it was dealt with efficiently and maturely by both guys, especially Kevin Pietersen. He conducted himself well through a tricky situation. I know it sounds a little silly but I was proud of him," he added.

Talking about the issues affecting the game, Flower spoke on the recent spot-fixing trial which ended with jail terms being handed out to three Pakistani cricketers, who fixed parts of a Test match against England last year.

"I wish I'd been in court to experience it and also learn a little more about that case. It's a very sobering lesson to cricketers. We're all aware that all the indiscretions in the past have not been discovered and brought out into the open," he said.

"We've only had a small bit of it taken to court, but we do have to learn lessons and try to ensure the game is as clean as possible. We all have a responsibility to the future of cricket.

"Everyone involved should be making decisions on that basis, especially the ICC. They are the real decision-makers and they must take their responsibilities very seriously," he added.

Asked if the entire issue will have a bearing on the England team's relations with Pakistani cricketers when the two sides clash in a series next year, Flower said, "It might be a sensitive trip but I can't sit here and envisage particular problems between the sides."

"I will certainly be telling our players that we are going there to play cricket and play cricket in the right spirit. And get on with it. It's important that the two sides play a good, hard, clean series," he added.

Comments
Topics mentioned in this article
Cricket England vs India 2011 England Cricket Team India Cricket Team India vs England 2011
Get the latest updates on IND vs NZ 2021, check out the Schedule and Live Score . Like us on Facebook or follow us on Twitter for more sports updates. You can also download the NDTV Cricket app for Android or iOS.