England batsman Kevin Pietersen has been officially reprimanded after he was found guilty breaching Article 2.1.3 of the ICC Code of Conduct during Saturday's T20 match against India at Kolkata. 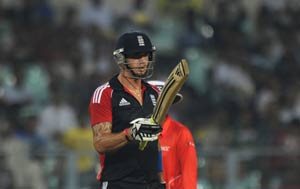 England batsman Kevin Pietersen has been officially reprimanded after he was found guilty of breaching Article 2.1.3 of the ICC Code of Conduct during Saturday's T20 match against India at Kolkata.

Pietersen has been reprimanded for the Level 1 breach after on-field umpires Sudhir Asnani and S.Ravi, third umpire Vineet Kulkarni and fourth umpire K.Srinath laid the charge.

The batsman pleaded guilty to the charge after he was found showing dissent at his dismissal. Suresh Raina trapped him LBW in the match.

ICC match referee Roshan Mahanama said that players should be more aware of their on-field actions. "As an experienced cricketer, Kevin should know that when the umpire raises his finger, a player should leave the crease without showing his emotions no matter what he may think of the decision," he said and added that Pietersen was guilty of displaying excessive and obvious disappointment at the decision against him.

Comments
Topics mentioned in this article
Cricket Michael Clarke England Cricket Team Kevin Pietersen West Indies Cricket Team Australia Cricket Team England vs India 2011 Suresh Raina India Cricket Team India vs England 2011
Get the latest updates on IND vs NZ 2021, check out the Schedule and Live Score . Like us on Facebook or follow us on Twitter for more sports updates. You can also download the NDTV Cricket app for Android or iOS.