India and England teams to arrive in Kochi on Saturday

BCCI curator P R Viswanadh will be visiting the stadium on Friday morning. 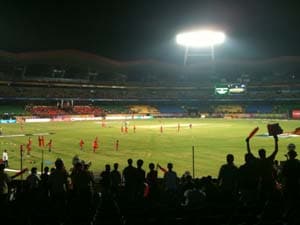 India and England's cricket teams will be arriving here on Saturday by a chartered flight for the second one-day international, scheduled to be held on January 15.

The teams will have separate practise sessions on Sunday and the day after.

The KCA said the ticket counters at the stadium will be functioning on January 13 and 14.

KCA said the aggregate ticket sales for the ODI has crossed Rs 90 lakh till (sales up to 5 PM today) and is expected to cross Rs 1 crore.

A full-fledged media box, media center and conference hall are getting ready to accommodate 125 to 150 scribes. A separate media centre, exclusively for the press photographers, is also ready.

Comments
Topics mentioned in this article
Cricket India vs England 2012 England Cricket Team India Cricket Team Suresh Raina MS Dhoni India vs England 2011
Get the latest updates on India vs South Africa and check out  Schedule, Results and Live Score. Like us on Facebook or follow us on Twitter for more sports updates. You can also download the NDTV Cricket app for Android or iOS.