I had to beg coach to get T20 berth: Pietersen

England's star performer in their only win in the lone T20 match against India, Kevin Pietersen on Saturday revealed that he had to beg the coach for a berth in the playing eleven at the Eden Gardens in Kolkata. 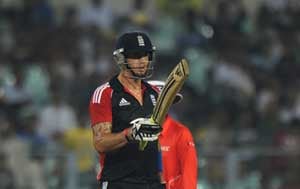 England's star performer in their only win in the lone T20 match against India, Kevin Pietersen on Saturday revealed that he had to beg the coach for a berth in the playing eleven at the Eden Gardens in Kolkata.

"I have grown up as a kid wanting to play in Kolkata (the Eden Gardens) and missed out on a one-day game. It was something that I was not really happy about... I begged the coach and said if I could stay and get onto the park tonight," said Pietersen at the post-match press conference.

"I'd be lying if I said it wasn't sore. A broken finger is a broken finger," said the middle-order batsman, who scored a match-winning 39-ball 53 in England's 121 chase over India.

He said he was on painkillers to be in the starting line-up.

"I've been on some pretty good pain killers this evening trying to mask the pain. It's just one of those opportunities to play at this great stadium. Everybody wants to play at the Lord's, Sydney Cricket Ground and the Newlands... This is one of them."

"A broken finger is a broken finger. When you get an opportunity and you mask the pain, you try. I tried this evening and it worked," he said.

Pietersen further said his relationship with stand-in T20 skipper Graeme Swann was fine despite the off-spinner's harsh comments against him in his autobiography.

"It's not something that I agree with... That players writing books during their career. But at the end, our environment is happy."

"It's nothing to do with our relationship. It's something that you guys had fun with. Between us and the team environment is absloutely normal. There is absolutely no drama. It is what it is. Our environment is happy," he added.

Comments
Topics mentioned in this article
Cricket England vs India 2011 England Cricket Team India Cricket Team Michael Clarke Kevin Pietersen West Indies Cricket Team Australia Cricket Team India vs England 2011
Get the latest updates on IND vs NZ 2021, check out the Schedule and Live Score . Like us on Facebook or follow us on Twitter for more sports updates. You can also download the NDTV Cricket app for Android or iOS.