Indian captain Mahendra Singh Dhoni blamed an ordinary display by his batsmen for the hosts' six-wicket defeat at the hands of England in the lone Twenty20 International here. 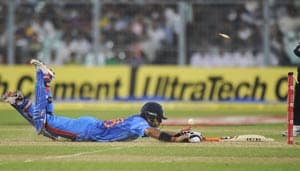 Indian captain Mahendra Singh Dhoni blamed an ordinary display by his batsmen for the hosts' six-wicket defeat at the hands of England in the lone Twenty20 International here.

It was important for batsmen to continue till end. We did not get off to a good start. "If you see the comparison between the two sides, the big difference was the four-wicket and the eight-wicket fall. So, their we lost the game," said Dhoni at the post-match press conference.

India were drubbed in England this summer as they were whitewashed in all three formats of the game but Dhoni said they were never short on confidence something that helped them bounce back.

"We did not completely need to revamp the conditions. Even when we lost the series in England we were in a positive frame of mind. If you know what went wrong, it becomes a bit easy to focus on those areas and improve as a team.

"I think the gap we got in the middle, the individuals got some time to work on those areas. If you see, the fast bowlers did a good job for India. Also the spinners were brilliant. It was like not down and out. The mood was always good in the camp. That helped us bounce back," the skipper added.

With an eye on India's tour to Australia late this year, the selectors have picked a relatively young side for the three-Test series against the West Indies at home starting next month. Dhoni said it would be a challenge for the youngsters.

"Test cricket is a bit different. You need to spend time in the middle. It's a bit difficult that requires slightly different temperament. A bit different to shorter version. The red ball spins a bit more, bowlers get reverse swing. It's a completely different challenge. Experience is very important. You will see the transition as they play more and more cricket they improve."

Dhoni also rubbished reports that he wanted to be rested for the West Indies series. "I've never answered all these questions."

Comments
Topics mentioned in this article
Cricket Eden Gardens England Cricket Team West Indies Cricket Team Australia Cricket Team India Cricket Team MS Dhoni England vs India 2011 India vs England 2011
Get the latest updates on IND vs NZ 2021, check out the Schedule and Live Score . Like us on Facebook or follow us on Twitter for more sports updates. You can also download the NDTV Cricket app for Android or iOS.