Lance Armstrong has yet more to lose if he admits doping

The disgraced Texan's decision to talk to the famed US talk show host has divided opinion, as some say he needs to do something radical to rehabilitate his public profile, while others say speaking out will only make matters once. 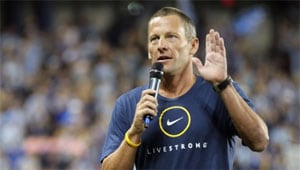 The cyclist Lance Armstrong could lose much more than his already ravaged reputation if he confesses to doping this week during a television interview with Oprah Winfrey -- he could end up in jail.

The disgraced Texan's decision to talk to the famed US talk show host has divided opinion, as some say he needs to do something radical to rehabilitate his public profile, while others say speaking out will only make matters once.

The crux of the matter is whether Armstrong, having been stripped of his seven Tour de France titles, will finally admit that he was a drugs cheat. Such a confession would overturn more than a decade of strenuous denials.

"If I were his lawyer, I'd be telling him not to do it. I think he's crazy," said Peter Keane, law professor at Golden Gate University in San Francisco, of the cyclist's decision to give the interview, which will be aired Thursday.

"He's in considerable jeopardy of some sort of criminal prosecution... for which he could go to prison," Keane said.

The threats to Armstrong's liberty stem from the fallen icon's role in the US Postal Service team, where he spent his most successful years in the saddle.

Having been paid by the government, the former team leader could face criminal charges for making fraudulent statements to his bosses.

He could also be accused of perjury over disclosures made under oath to a US federal jury in 2005. If convicted, each false statement could lead to five years in jail.

Armstrong has always maintained that he did not use banned substances during his stellar career, but in August last year he chose not to contest charges put forward by the US Anti-Doping Agency (USADA) that he was a serial drugs cheat.

The pitfalls of speaking to Winfrey, considered the favored TV forum for "tell all" confessional style interviews, appear to have been weighed, and a decision taken that it is worthwhile to reveal something new.

"I'm anticipating a major announcement," said Jordan Kobritz, chair of the State University of New York at Cortland's International Sport Management graduate program, noting that Armstrong would otherwise have no reason to talk.

"You don't have to go on Oprah to do what he's been doing in his entire athletic life, and that is deny, deny and deny that he ever engaged in illegal drugs," Kobritz said, agreeing with Keane that perjury and criminal charges are possible.

One possibility is that justice officials in California will re-open a file they closed last year concerning alleged drug use and misuse of funds when Armstrong was with the US Postal Service team.

Another case that could come back to haunt the cyclist is an arbitration hearing in Dallas in 2005 where he said under oath that he had never taken banned substances, a statement which raises the specter of perjury charges.

But Armstrong's profile, albeit diminished, as a cancer survivor who raised awareness and hundreds of millions of dollars to fight the disease, is likely the chip that could spare him the worst possible outcome.

"Regardless of whether he comes out and makes a flat admission, I guarantee there will still be a majority of US citizens who will say 'I don't care what he did, he's still my hero,'" Kobritz said, citing Armstrong's cancer survival.

"Unless there's a prosecutor who wants to stake his reputation and his future political career," on putting Armstrong in the dock, "I suspect they're going to leave him alone," Kobritz added.

But Michael McCann, director of the sports law institute at Vermont Law School, said there could be an upside to speaking out, if not immediately then in the mid-term, even if that means going to jail beforehand for perjury.

"It wouldn't be five years, but it could be six months, any amount of time would be pretty bad," he said.

But there could be "a sense of coming clean, having a cleaner conscience... public forgiveness, and relief maybe," added McCann, who is soon to head up a new sports and entertainment law institute at the University of New Hampshire.