Filippo Ganna of Italy won the fifth stage of the Giro d'Italia through the southern Calabria region. 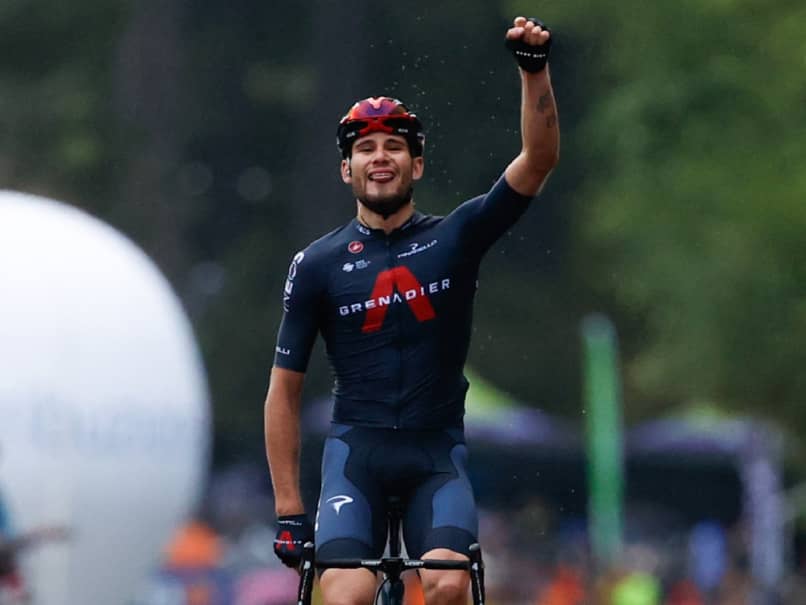 Filippo Ganna finished 34 seconds ahead of anyone else to win Giro d'Italia fifth round.© AFP

Italy's Filippo Ganna gave the Ineos team a boost on Wednesday with a breakaway win in the fifth stage of the Giro d'Italia through the southern Calabria region. Ineos lost their lead rider Geraint Thomas to a broken pelvis on Tuesday, and subsequently promised to target stage wins instead of the overall standings. The powerfully built world time-trial champion Ganna crossed the line alone 34sec ahead of a group of favourites including Portugal's Joao Almeida (Deceuninck) who retained the leader's pink jersey. Austrian Patrick Konrad of the Bora-Hansgrohe team finished second just ahead of Almeida.

Ganna won Saturday's opening time-trial in Palermo, and on his first Giro d'Italia has two more time-trials to target.

The race crossed to mainland Italy after four days in Sicily, covering 225km from Mileto to Camigliatello Silano.

Ganna was the sole survivor of a breakaway launched before the 50km mark on the rolling slopes of the Valico di Montescuro, attacking with 17km to go.

The Italian left Belgian Thomas De Gendt and Colombian Einer Rubio in his wake, after the pair had counterattacked at the foot of the climb, cresting the summit one minute ahead of his pursuers.

In the descent, uneven and slippery in the rain, Italian two-time Giro winner Vincenzo Nibali set the pace and tested his rivals.

Ganna held on for the stage win, while his compatriot Nibali appears to be in a strong position in the overall.