Egan Bernal will become the first Colombian to win the race should he hold on over the 33km climb on Saturday's summit finish in the Alps. 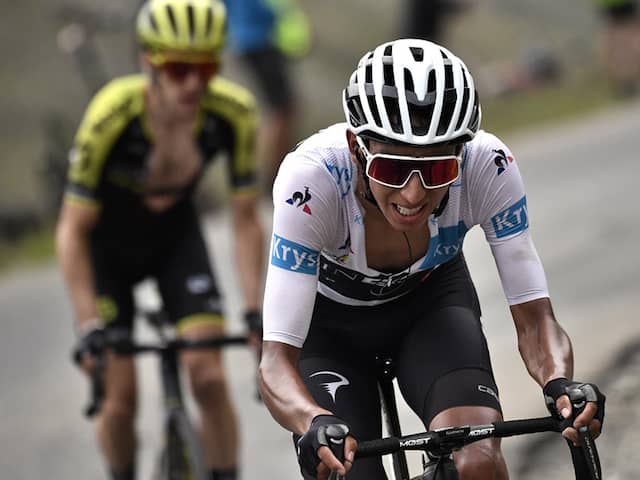 Egan Bernal snatched the overall lead on the Tour de France on Friday after stage 19 was abandoned in a massive hail storm with the Team Ineos rider now poised to become the first Colombian to win cycling's greatest prize. The stage will have no official winner, but the yellow jersey goes to Bernal as he crossed the summit first and was racing downhill with Simon Yates when the pair were told of the danger ahead, the road to Tignes buried in hail and rubble.

Bernal led atop the Col de l'Iseran in the Alps where the race times were taken when the stage was halted.

The 22-year-old will become the first Colombian to win the race should he hold on over the 33km climb on Saturday's summit finish in the Alps with just Sunday's procession into Paris to follow.

Bernal attacked on Friday's last climb, about 5km from the summit, with defending champion Geraint Thomas, plus title rival Steven Kruijswijk trailing around a minute behind.

Overnight leader Julian Alaphilippe was a further minute adrift and was disconsolate after the race.

"I don't think I can win the yellow jersey back," Alaphilippe told France television as he climbed into his car and 45 seconds off the overall lead.

"I was beaten by something stronger than me."

Alaphilippe wore the yellow jersey for 14 days, carrying the hopes of the public who are so eager to see a French winner for the first time since Bernard Hinault in 1985 and defying the pundits who felt he would wilt in the Pyrenees.

Many felt it was the right decision to call off the race.

"It was the only decision possible, imagine what might have happened?" FDJ sports director Marc Madiot said.

Ineos may feel robbed of a further opportunity because Bernal looked set to pulverise the overall standings.

Ineos led the ascent of the Col de l'Iseran with three men, Wout Poels, Dylan van Baarle and Jonathan Castroviejo ahead of Thomas and Bernal.

With the isolated Frenchman struggling for breath towards the summit of the highest point of the Tour, Bernal attacked 5km short of the peak, scampering away with ease.

Trailing behind the peloton in tears, Thibaut Pinot pulled out with a thigh problem an hour into the race still suffering from the injury picked up in a crash two days ago.

The FDJ contender for overall victory was in fifth place at the start of a stage which suited his qualities.

When he dismounted from his bike he ended a roller-coaster ride which included victory atop the first Pyrenean climb to the summit of La Col du Tourmalet, where his performance put him in the frame for a tilt at the title.