Pakistan finished Day 2 of the 1st Test against Zimbabwe at 374/6, with a first innings lead of 198 thanks to Fawad Alam's fourth Test century. 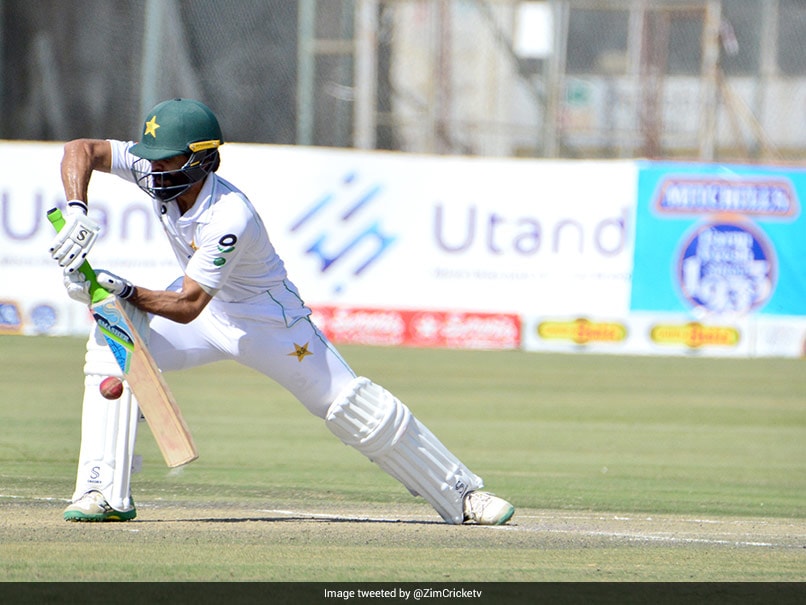 Fawad Alam notched his fourth Test hundred as Pakistan built an imposing first innings lead over Zimbabwe on the second day of the first Test in Harare on Friday. Alam's unbeaten 108, along with Imran Butt's painstaking 91 earlier in the day, guided Pakistan to 374-6 at the close, giving them a lead of 198 over Zimbabwe's first innings total of 176. Hasan Ali was the other unbeaten batsman with 21 on a day that saw the Pakistan batsmen struggling in the morning -- they scored just 59 from 32 overs -- before accelerating in the next two sessions.

Alam drove Zimbabwe seamer Donald Tiripano for two consecutive boundaries to race from 93 to his century, having remarkably converted each of his Test fifties into three figures.

The 35-year-old left-hander smashed a debut hundred in Sri Lanka in 2009 but was discarded after only two more Test and then had to wait for 10 years and 259 days for his next Test, in England last year.

Fawad has so far batted for 155 balls, hitting 16 boundaries. He added 107 for the fifth wicket with Mohammad Rizwan who made 45.

Alam gave thanks to a higher power for his successful return.

"I was nowhere a few years back, so whatever Almighty has given me I am grateful and this knock is a great satisfaction," said Alam, adding that the slow pitch made scoring difficult.

"The ball was not coming onto the bat but when they took the new ball scoring became much easier and when I came to bat the platform was set by the openers," he said.

While Alam made the most of his opportunity, opener Butt missed out on a maiden Test century by just nine runs.

Others amongst runs were Abid Ali 60 and Azhar Ali 36.

Zimbabwe's best bowler Donald Tiripano, who has figures of 3-89, had already derailed Pakistan with a double strike in the post-lunch session with the wickets of Azhar and Babar Azam.

The Pakistan captain Azam drove Tiripano firmly to Roy Kaia at a unorthodox short mid-on to record his first ever golden duck in Test cricket.

Resuming on 103 without loss, the Pakistan openers struggled early on as the Zimbabwe bowlers kept tight line and length.

Butt, playing his third Test, and Abid could add only 10 runs in the opening 10 overs -- eight of the first 14 overs were maidens. The first boundary only arrived in the 18th over of the morning.

With the introduction of Tendai Chisoro's left-arm spin, Abid retreated into his shell completely before an attempted drive found the edge of the bat.

Brendan Taylor juggled the chance at slip before pouching it to end Abid's innings, which last 140 balls and included 10 fours, and an opening partnership of 115.

The second Test is also in Harare, from May 7.

Zimbabwe Cricket Team Zimbabwe vs Pakistan, 1st Test Fawad Alam Cricket
Get the latest updates on ICC T20 Worldcup 2022, check out the Schedule and Live Score. Like us on Facebook or follow us on Twitter for more sports updates. You can also download the NDTV Cricket app for Android or iOS.