Yuvraj Singh, according to sources, is set to make a comeback for the Twenty20 World Cup to be held in Sri Lanka in September. 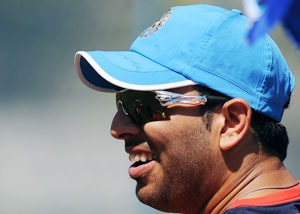 Yuvraj Singh, according to sources, is set to make a comeback for the Twenty20 World Cup to be held in Sri Lanka in September.

As per sources, The National Cricket Academy has sent his report to the BCCI and Yuvraj will almost certainly make the cut. The T20 squad for the World Cup is to be picked tomorrow in Mumbai.

The selectors who are to pick the final squad for the World Twenty20 Championship in Sri Lanka in September had earlier indicated that Yuvraj Singh, who is training at the NCA after recovering from a rare germ cell cancer, is in contention for a spot.

"It will depend on the fitness certificate that he will get from the NCA," a selection committee source had then told PTI.

He has always been on the BCCI radar and recently BCCI official and IPL governing council chairman Rajeev Shukla too had shown satisfaction on his fitness.

Comments
Topics mentioned in this article
Anil Kumble Gary Kirsten Yuvraj Singh Cricket Chris Gayle Shane Watson Ramnaresh Sarwan
Get the latest updates on ICC T20 Worldcup 2022 and CWG 2022 check out the Schedule, Live Score and Medals Tally. Like us on Facebook or follow us on Twitter for more sports updates. You can also download the NDTV Cricket app for Android or iOS.