Women's World Cup: Fate of Pakistan's games in Mumbai to be decided soon

On Tuesday the matter was discussed at the Board's all-powerful Working Committee meeting here and it was decided to convey to the ICC the situation prevailing in the country. 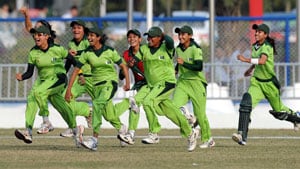 Amid simmering tension on the Indo-Pak border, the Mumbai Cricket Association (MCA) and local police authorities here suggested to the ICC that it would be better if matches involving Pakistan in the Women's Cricket World Cup are shifted out of the city.

According to MCA sources, this was done at a meeting held in the association's premises today afternoon involving an International Cricket Council (ICC) representative, tournament director Suru Nayak, who is employed with the Cricket Board, a few top police officials and some MCA office bearers.

"It was told (to ICC representative) that adequate security could be provided to the women cricketers. But the public feeling on the issue was also conveyed and it was mentioned in the current scenario that it would be difficult to stop political parties (from protesting against Pakistan women's team) if the matches are held here," an MCA official told PTI.

"Mr Nayak said that the ICC would be apprised of what took part in the meeting and they would take a call on the matter within 24 hours," he added.

Another MCA official said that there is specific threat of disruption of the matches from the Shiv Sena.

Yesterday the matter was discussed at the Board's all-powerful Working Committee meeting here and it was decided to convey to the ICC the situation prevailing in the country.

BCCI President N Srinivasan said the issue was now for the ICC to decide.

"We have informed the ICC about it. They will have to examine and take a view," he said after the meeting.

The BCCI left it on the ICC to take a final call on the venues after the tension at the LoC spilled over to the sporting arena with Hockey India sending back all the nine Pakistani recruits, who were signed for the Hockey India League, after protests over the killing of Indian soldiers on the border.

The eight-team women's cricket World Cup is scheduled to be held in the city between January 31 and February 17. The Wankhede Stadium, Cricket Club of India's Brabourne Stadium, the Mumbai Cricket Association's Bandra Kurla Complex ground and the MIG Club in Bandra are the venues for the matches.

The BCCI decided that the best course of action would be to apprise the ICC of the security concerns that have been raised by the MCA.

"Logistically, it would be tough to change the venue. But it is for the ICC to decide because they are the ones who picked the venue in the first place," an official said.

As per the schedule, Pakistan are set to arrive here on January 26, and will play their league games at the MCA-Bandra Kurla complex.

The Gujarat Cricket Association (GCA), which had hosted a high-profile men's T20 game between India and Pakistan at Ahmedabad's Motera Stadium last month, expressed inability to host the women's WC games featuring the team from across the border.

"The BCCI had approached us asking whether Ahmedabad would be in a position to host the ICC Women's World Cup 2013. But we have refused to host the matches here following rising tension at the border," GCA secretary Rajesh Patel told PTI today.

"Whether to go ahead with the matches at the same venue or shift it to an alternate place will now be decided by the International Cricket Council and the Board of Control for Cricket in India," he added.

The BCCI had approached GCA with a "verbal" proposal whether it could host the matches in Ahmedabad.

Comments
Topics mentioned in this article
Sachin Ramesh Tendulkar Football Cricket Pakistan Cricket Team
Get the latest updates on ICC T20 Worldcup 2022 and CWG 2022 check out the Schedule, Live Score and Medals Tally. Like us on Facebook or follow us on Twitter for more sports updates. You can also download the NDTV Cricket app for Android or iOS.