Shane Shillingford, Chris Gayle and Marlon Samuels stood tall for the West Indies on Day 1 of the final Test between the two countries. 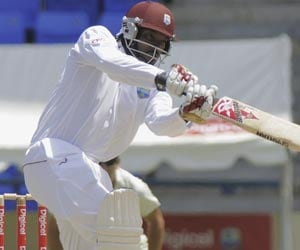 # Shane Shillingford (5/59) has produced his third five-wicket haul in Tests - his first two were 6 for 49 against Zimbabwe at Bridgetown in the first Test of the present series and 6 for 119 against Australia at Dominica in April 2012.

# With 14 wickets at 11.85 runs apiece, Shillingford is the leading wicket-taker in the present series, including two five-wicket hauls.Â  Against Australia last year, he had captured 14 wickets at 26.14 runs apiece in two Tests.

# Shillingford is the first bowler to produce two five-wicket hauls at Roseau, Dominica. His tally of 15 wickets at 18.53 runs apiece in just two Tests is the most by any bowler at this venue.

# Shillingford is also the first bowler to capture ten wickets in a Test match at Roseau, accomplishing the feat against Australia last year.

# Marlon Samuels (3/15) has produced his second best Test bowling performance, next only to the 4 for 13 against Zimbabwe at Bridgetown in the first Test of the present series.

# Since posting 150 & 64 not out against New Zealand at North Sound in July 2012, Chris Gayle (61 not out) has registered his first fifty in nine innings.

# Gayle's 35th Test fifty is his second against Zimbabwe.