Kirk Edwards and Dwayne Bravo both notched centuries as the West Indies flayed New Zealand's attack to reach 363 for four, before Nikita Miller dominated with the ball to skittle the Black Caps for 160. 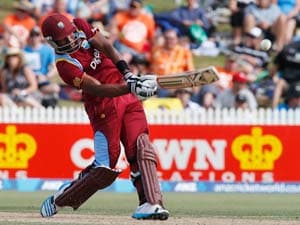 The West Indies racked up their highest-ever limited overs total to crush New Zealand by 203 runs in the fifth one-day international on Wednesday, and draw the series 2-2. (Scorecard)

Kirk Edwards and Dwayne Bravo both notched centuries as the West Indies flayed New Zealand's attack to reach 363 for four, before Nikita Miller dominated with the ball to skittle the Black Caps for 160.

The mammoth total was the highest ever posted by the West Indies in a 50-over match, surpassing the previous mark of 360 set against Sri Lanka in 1987.

Edwards and Dwayne Bravo came together at 143-3 and put on 211 runs, with Edwards finishing unbeaten on 123, his maiden ODI century. Skipper Bravo was dismissed shortly before the end of the innings for 106.

Opener Kieran Powell had launched a blistering assault at the start of the innings, smashing 73 runs off just 44 balls with 12 fours and two sixes. (Also read: Kiwi fan wins $83,000 by 'dismissing' Powell)

He plundered 18 off a single Mitchell McClenaghan over, with one lucky spectator winning NZ$100,000 ($83,000) from a beer sponsor by catching one of his sixes one-handed.

New Zealand captain Brendon McCullum brought on his brother Nathan to try to stem the runs and the tactic paid off almost immediately when Powell was out lbw for 73, trying to sweep.

Fellow opener Johnson Charles was run out for 31 when Nathan McCullum sent the stumps flying with a direct hit as the batsman attempted a quick single and Lendl Simmons followed soon after, caught by Kane Williamson.

Bravo came to the crease and steadied the innings with Edwards, who smashed a six to notch his half century.

The West Indies bludgeoned 117 off the last 10 overs, with Bravo out trying to smash Williamson out of the ground.

New Zealand made a disastrous start, slumping to 65 for five after just 15 overs through a combination of rash shots and a much-improved West Indian attack.

The Black Caps openers went cheaply, with Martin Guptill out lbw for six and dangerman Jesse Ryder (17) scooping the ball skyward going for a slog.

Brendon McCullum failed to stop the rot coming in the middle order, offering Johnson Charles a simple catch when he charged down the wicket to a seemingly innocuous delivery from Nikita Miller, who finished with figures of four for 45.

A luckless Luke Ronchi dismissed himself for 15 when he dislodged the bails with his foot as he squared up for a shot, in a sign nothing was going the Black Caps' way.