India captain Virat Kohli took to Twitter on Wednesday to share an adorable photo of himself with his wife Anushka Sharma and daughter Vamika. 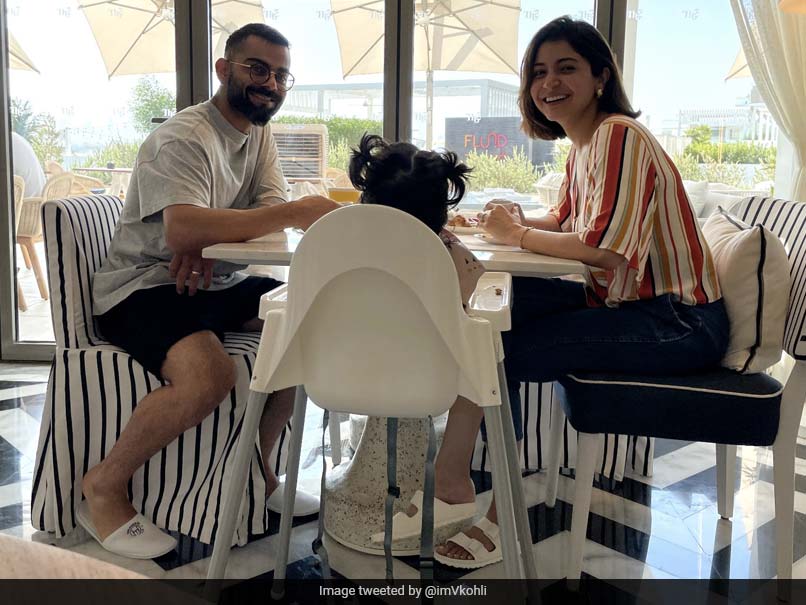 Virat Kohli and Anushka Sharma posed for a photo from Dubai.© Twitter

India captain Virat Kohli took to Twitter on Wednesday to share an adorable photo of himself with his wife Anushka Sharma and daughter Vamika. In the photo, Kohli and Anushka can be smiling and the duo are joined by Vamika at breakfast in Dubai. Kohli captioned the post with a red heart emoji. The India skipper is in the UAE for the ongoing T20 World Cup. Anushka too had recently posted a few pictures from her time in quarantine in the UAE.

Giving her fans a sneak peek of her quarantine life, the Bollywood actress posted several images of Virat Kohli from her hotel room and captioned it as "Couldn't choose between these two captions - Quarantine makes the heart fonder & Love in the time of bubble life  #OhWell , you get the point."

Coming back to cricket, Kohli recently led India to a seven-wicket win over England in a T20 World Cup warm-up match on Monday.

Kohli himself couldn't get a big score but youngster Ishan Kishan dazzled with a scintillating knock of 70. He was well-supported by KL Rahul who also hit a half-century to help India chase down the 189-target with an over to spare.

India will face Australia in their second and final warm-up game on Wednesday before beginning their campaign against arch-rivals Pakistan in Dubai.

After the completion of T20 World Cup, Kohli, who had already stepped down as captain of his Indian Premier League franchise Royal Challengers Bangalore, will step down as the skipper in the shortest format of the game.

Virat Kohli Cricket Social
Get the latest updates on IND vs NZ 2021, check out the Schedule and Live Score . Like us on Facebook or follow us on Twitter for more sports updates. You can also download the NDTV Cricket app for Android or iOS.