Shane Warne gave Steve Smith a slight edge over Virat Kohli in Test cricket but added that Kohli will "take the cake" across formats. 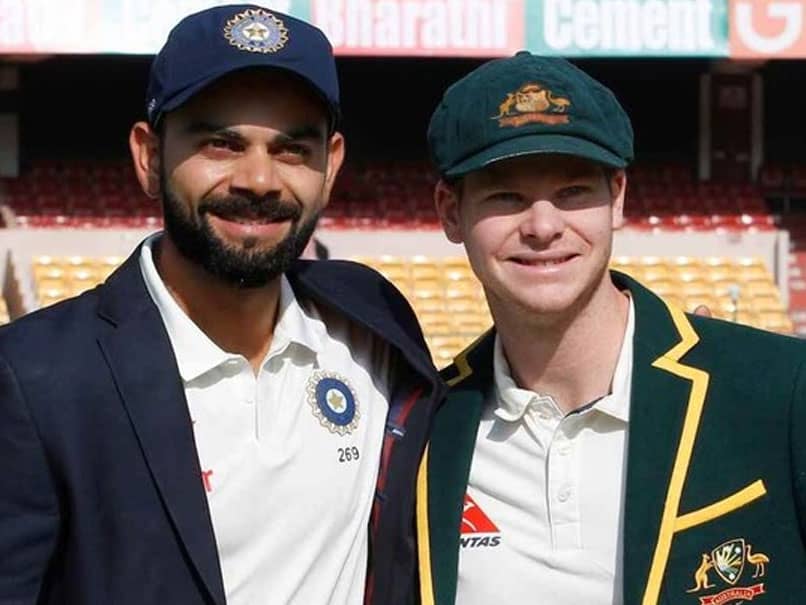 Virat Kohli and Steve Smith are two of the best batsmen of the current generation.© BCCI

Steve Smith, returning to Test cricket after serving a one-year ban, has taken the cricketing world by storm with his marathon knocks in the ongoing Ashes series. In just four innings, Steve Smith went past every other batsman to become the leading run-scorer in Test cricket in the ongoing calendar year. He has amassed 589 runs in the four innings at an astounding average of 147.25. Smith's scintillating performance with the bat has once again added fuel to 'who is the best batsman of this era?' debate. There is not a single cricket pundit who is not asked this question. Answering the same question, Australian legend Shane Warne gave Steve Smith a slight edge over the Indian skipper in Test cricket but also added that Kohli will "take the cake" across formats. He even rated Kohli as the best One Day International (ODI) player to have played the game in the history of the format, even better than West Indian legend Vivian Richards.

Legendary Australia leg-spinner Shane Warne has said that if he had to pick one for Tests, Smith would have a slight advantage over his otherwise favourite Kohli. Warne feels across formats though Kohli takes the cake and the Indian will go on to break Sachin Tendulkar's record of 100 hundreds.

"As far as Test cricket goes, I would probably say it is a really tough one between Virat and Smith. But I think if I had to pick one batsman in Test cricket, it would be Smith, but if I lost that and had Virat, I would still be happy because he is a legend," Warne pointed.

"I think Virat is the best batsman in the world. I think if I had to pick one batsman across all formats, it would have to be Virat. Viv Richards was the greatest batsman I saw in ODI cricket and in all cricket probably. But Virat is now the greatest ODI player that we have seen. He overtakes Viv for me."

India skipper Kohli hits centuries like he is taking a walk in the park and while not many thought that Tendulkar's record of 100 hundreds would get overtaken anytime soon, the 30-year-old is very much in the race to overtake the legend.

With 68 centuries in international cricket and age on his side, Warne believes that Kohli could well finish with the maximum number of centuries when he hangs his boots.

The former Australia star said that his good friend Tendulkar could have Kohli overtaking him. But the wizard was quick to add that making and breaking records is what makes the game interesting.

"Yes, I think Sachin's records are in danger and it is like anyone else who has a record. With me having 708 Test wickets, I was asked the question if I think Nathan Lyon can get me, I hope he does because that will mean that he has played well for a long period of time. It is the same with Sachin. I believe if you ask him if he wants Virat to break his records, he would say absolutely. It will be great fun to watch. Look out Sachin, Virat is coming for you," he smiled.

Warne feels that Kohli has the attitude needed to go out and succeed against the best bowlers in the game. "I think he will break all records and I am a big fan of how he goes about his job and I have said that publicly as well. I think Virat in all forms of the game is the best batsman in the world," he said.

While Kohli's achievements as a batsman are well documented, the captain has often been criticised. But Warne begs to differ and feels that the Indian skipper is learning the tricks of the trade and getting better with each passing day.

"I think he is a wonderful leader. You are never the best version of yourself when you first start as captain and it generally takes a bit of time. I think he is growing into the role. I think maybe he was a little bit too emotional when he took over, but I love his passion and I think he is starting to get the balance between emotion, passion and being calm. I think he is also getting better tactically," he explained.

Warne also wants to thank the run-machine for standing by the longest format of the game and giving it the due importance in the age of slam-bang T20 cricket.

Virat Kohli Shane Warne The Ashes 2019 Cricket
Get the latest updates on India vs England Series, India vs England , live score and IPL 2021 Auction . Like us on Facebook or follow us on Twitter for more sports updates. You can also download the NDTV Cricket app for Android or iOS.