Umar Gul has played just 8 ODIs and 4 T20Is for Pakistan since having a knee surgery in May 2013 at Melbourne. 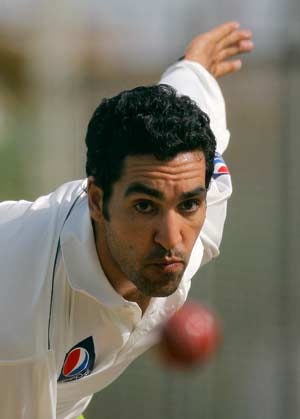 A file pic of Pakistan pacer Umar Gul bowling in the nets.

Pakistan's seasoned pace bowler, Umar Gul has admitted that a nagging knee problem has forced him to think about quitting Test matches.

Gul, who has played just eight One-day internationals and four T20 matches for Pakistan since having a knee surgery in Melbourne in May last year, said he was frustrated at being plagued by fitness issues.

"It is frustrating and right now the doctors and trainers at the national cricket academy have told me I am still not 100 per cent fit and need to do more rehabilitation and gym training so that the knee is back to normal," Gul said.

"I myself don't feel comfortable bowling right now because of the knee problem and if you ask me right now if I could play Test matches I would say no," he said.

Gul, 30, who is the most experienced pace bowler in the present team with 163 Test, 173 ODI and 80 T20 wickets, was sidelined for the ongoing series in Sri Lanka because of fitness problems.

This after he struggled with his knee during comebacks to the team for the ODI series against Sri Lanka in the UAE in January and then in the Asia Cup and T20 World event in Bangladesh in March-April.

"Honestly speaking at present I don't know what my future is. But I am targetting a return to the test side for the series against Australia later this year. But if that doesn't work out I could quit playing Tests to prolong my career" he said.

Asked if head coach, Waqar Younis or spin bowling coach, Mushtaq Ahmed had spoken to him during the recent national camp in Lahore regarding his future, Gul said no such discussion had taken place.

"Honestly no one has spoken to me about what plans they have for me. I am presently undergoing rehabilitation and I have set a personal target of playing in the Tests against Australia at 100 per cent fitness. If that doesn't happen I will have to rethink my future," he said.

With Gul out of contention for the time being, the Pakistan team is badly lacking in experienced Test bowlers as the current lot has limited exposure to five day cricket.

Junaid Khan is the most experienced with 17 Test appearances followed by Wahab Riaz (7), Rahat Ali (6) and Muhammad Talha, who played three matches.

The tall Muhammad Irfan who is also out of the team with fitness problems has played just four tests.

Gul, who has 47 Test appearances, said he would think about restricting himself to limited overs cricket after the Australia series.

"It is never easy to make a comeback from a knee surgery. But I have tried to do my best as I want to play for Pakistan. But if I am not feeling 100 per cent fit and I don't feel comfortable bowling I will not make myself available for selection," he added.

Gul also admitted that at present not much quality talent was coming up in the pace department in Pakistan and agreed that there was a dire need for selectors to start thinking about preparing and grooming adequate replacements for senior players.

He also advised the younger players to not let opportunities slip and work hard on improving and proving themselves.