T. Natarajan was one of the finds of the Australia tour and the homecoming welcome was a pleasant surprise for the bowler. 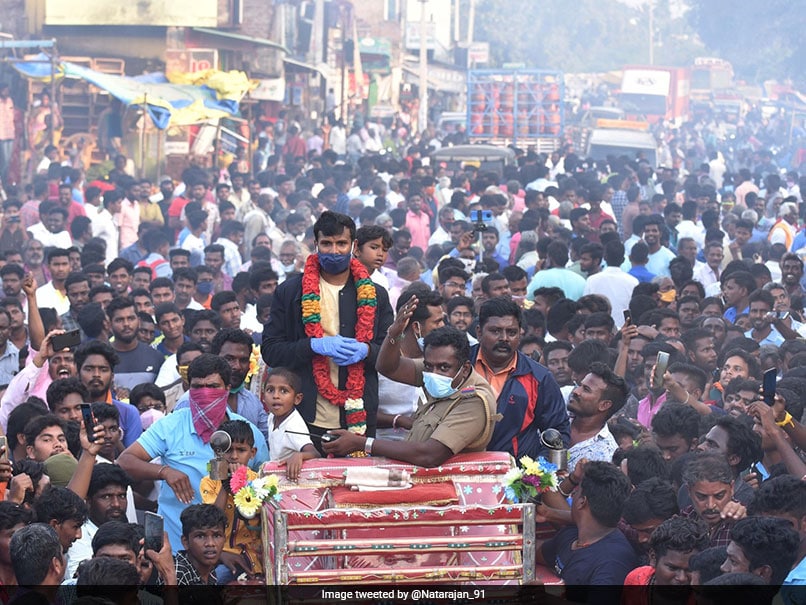 T Natarajan said that he was "extremely surprised" by the reception he received in his hometown.© Twitter

One of the heroes of the Gabba Test, T. Natarajan, has said though he was "elated and ecstatic", he was taken by surprise with the reception he received in his hometown of Chinnappampatti, Tamil Nadu. Natarajan, like many other Indian cricketers, had received a hero's welcome at home following a memorable tour of Australia. India pulled off an incredible win in the final Test at the Gabba in Brisbane last month to clinch the four-match Test series in Australia. On Tuesday, the left-arm fast bowler, who made his Test debut in the final Test, took to Twitter to thank his fans for the "love and support" and also shared pictures from when he reached his hometown.

I was elated, ecstatic and extremely surprised by the reception at my hometown ,Chinnappampatti. Thanks a ton for the love and support.pic.twitter.com/wbm3SQ2Y23

Beset by injuries, India had a completely new-look bowling attack in Brisbane with Natarajan among the fresh faces. He made an instant impact on his debut, taking three wickets in the first innings.

He did go wicketless in the second innings as Mohammed Siraj and Shardul Thakur took centre stage but the left-armer still received widespread praise for his performance.

With his first Test cap in Brisbane, Natarajan had also become the first Indian player to make his international debut across all three formats on the same tour.

The 29-year-old made his first international appearance in the final ODI in Canberra, which India won after having lost the opening two matches of the series. Natarajan took two wickets, but proved to be a touch expensive, giving away 70 runs off his 10 overs.

Natarajan was part of all three T20Is that followed the ODI series. He made a big impact on his T20I debut in Canberra, taking three wickets for 30 runs.

He followed that with a miserly bowling spell in Sydney, taking 2 wickets for 30 runs.

In the final T20I at the SCG, the left-arm fast bowler went for 33 runs off his four overs with a solitary wicket as Australia won by 12 runs to deny India the clean sweep.

Australia Cricket Team T Natarajan Cricket
Get the latest updates on IND vs NZ 2021, check out the Schedule and Live Score . Like us on Facebook or follow us on Twitter for more sports updates. You can also download the NDTV Cricket app for Android or iOS.