Umpires Marais Erasmus of South Africa and Paul Reiffel of Australia made the decision to call off the match early in the second innings after a spell of rain left the outfield at the Sydney Cricket Ground damp and slippery. 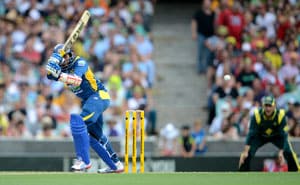 Sri Lanka cricket captain Mahela Jayawardena says his team will officially complain to the match referee over the abandonment of Sunday's fourth one-day international, which may have cost it the chance to win the five-match series.

Umpires Marais Erasmus of South Africa and Paul Reiffel of Australia made the decision to call off the match early in the second innings after a spell of rain left the outfield at the Sydney Cricket Ground damp and slippery.

Sri Lanka was 14 without loss in the fourth over of its innings, replying to Australia's moderate total of 222 for nine. A win would have given it a 3-1 lead in the series and a rare series win over Australia at home.

At the time of the abandonment, almost two hours of play had been lost to rain and Sri Lanka was likely to face an even more achievable total under the Duckworth-Lewis system.

At a news conference Sunday, Jayawardene questioned the decision to abandon the match and the inability of the Sydney Cricket Ground to cope with the effects of very moderate rainfall.

"It's disappointing because at the SCG I would assume that a ground of this magnitude you should be able to get a game in," Jayawardena said. "Maybe they should do what we do back home - cover the entire ground.

"I think we can probably write to the match referee (Javagal Srinath of India) because obviously the interpretation we got three months ago in the New Zealand series (in Sri Lanka) was different. It was deemed that we'd only stop play if it was dangerous. ... I think you need to find a bit more consistency, and that's something that we'll probably write and put it across to them."

Staff at the Sydney Cricket Ground worked hard on Sunday to make it playable after the rain. But head groundsman Tom Parker said that because the rain was relatively light, it stayed on the surface rather than sinking in.

The additional absence of wind to assist drying meant that the ground remained damp in some areas and possibly dangerous.

"I think this ground is known for its drainage," he said. "I've played a number of games here where it's held a lot more water than that and we've managed to get back on and play games of cricket.

"Sri Lanka definitely would have loved to have gotten back on there. As the game got shorter, with 10 wickets in hand, it was probably going to suit them a lot more. But we certainly wanted to play as well to give ourselves a chance at winning the series."

The final match of the series is at Hobart on Wednesday.

Comments
Topics mentioned in this article
Cricket Australia Cricket Team Sri Lanka Cricket Team Rajasthan Royals Kochi Tuskers Kerala Marais Erasmus Paul Ronald Reiffel
Get the latest updates on ICC T20 Worldcup 2022, check out the Schedule and Live Score. Like us on Facebook or follow us on Twitter for more sports updates. You can also download the NDTV Cricket app for Android or iOS.