Pakistan's discarded wicketkeeper, Zulqarnain Haider has once again threatened to make some revelations about the alleged involvement of a few Pakistani players in spot-fixing. 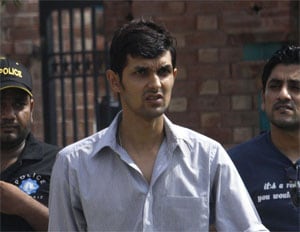 Pakistan's discarded wicketkeeper, Zulqarnain Haider has once again threatened to make some revelations about the alleged involvement of a few Pakistani players in spot-fixing.

In a message posted on his facebook account, Haider criticised the selection of wicketkeeper Kamran Akmal in the national team for the series against Australia and the ICC Twenty20 World Cup in Sri Lanka.

"If he has any clearance letter from the ICC he should show it publicly and if he doesn't do that then I will be forced to come out with the truth," he added.

Haider, who scored 84 on his Test debut against England in 2010 when Kamran was injured, said he would make some startling revelations about the involvement of some players in spot-fixing if Kamran didn't show his clearance letter.

Stating that he was forced to post his feelings as he wanted Pakistan cricket be clean and clear of corruption, Haider told PTI: "I have said what is in my mind and until now I have kept quiet in the hope that the Pakistan board will not allow players with question marks surrounding their performances to play again."

"That is why he has recalled Kamran and this should be investigated," Haider added.

Meanwhile, according to sources, the PCB was looking into the latest statement by Haider and was not happy with him. "It had told him to refrain from making statements while pardoning him last year and some disciplinary action could be taken against him," the source said.

The PCB Chairman, Zaka Ashraf had claimed in a television interview that Kamran was picked in the team after the board sought advice from the ICC on his clearance.

The ICC, however, made it clear that it had issued no clearance for Kamran and his selection was purely an internal matter of the PCB.

Kamran was picked in the Pakistan squad last month for the Twenty20 matches. And on last Monday the selectors also included him in the One-day squad in place of Sarfraz Ahmed.

The experienced keeper was sidelined from the national team for about an year and a half after last appearing in the 2011 World Cup. His name was also mentioned in the spot-fixing trial held in London last year.

Kamran, who is currently in Sri Lanka playing in the country's premier league when contacted, refused to comment on Haider's latest outburst.

"I have been selected in the Pakistan team and my focus right now is on just performing for my country," said Akmal. Haider, in November 2010, had created a huge controversy in Pakistan cricket when he fled from the team hotel in Dubai and flew to London where he claimed political asylum.

The wicketkeeper had later said that he was forced to flee the hotel after being threatened by a bookmaker who wanted him to fix matches of the One-day series against South Africa in which he featured.

In early 2011, Haider returned to Pakistan on the assurances of interior minister, Rehman Malik who said he and his family would be provided all security in Pakistan.

The PCB also after fining him, cleared him to play domestic cricket and last season he resumed his first class cricket career.

Comments
Topics mentioned in this article
Salman Butt Mohammad Amir Mohammad Asif Kamran Akmal Cricket Zulqarnain Haider Pakistan Cricket Team New Zealand Cricket Team
Get the latest updates on ICC T20 Worldcup 2022 and CWG 2022 check out the Schedule, Live Score and Medals Tally. Like us on Facebook or follow us on Twitter for more sports updates. You can also download the NDTV Cricket app for Android or iOS.