South Africa vs England: Needing 376 to win, South Africa bowled England out for 268 on the fourth day to register their first win in World Test Championship. 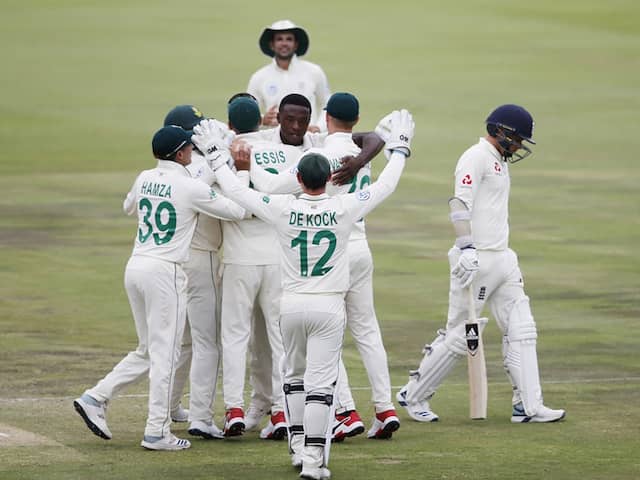 South Africa broke down stubborn England resistance to win the first Test of their World Test Championship series by 107 runs at SuperSport Park on Sunday. England needed 376 to win but despite some committed batting were bowled out for 268 on the fourth day of the five-day encounter. An enthralling contest swung South Africa's way when left-arm spinner Keshav Maharaj bowled Ben Stokes to halt a brief flurry of strokes as Stokes and captain Joe Root tried to lift the scoring rate before the second new ball was due.

The new ball then had an immediate impact with Kagiso Rabada having Jonny Bairstow caught at gully before Anrich Nortje claimed the crucial wicket of Root, who made a fighting 48 before he was caught behind.

It was the second time in the day Nortje claimed a wicket with the second ball of a new spell after he made the first breakthrough of the day by dismissing top-scorer Rory Burns for 84.

The remaining wickets fell quickly, with Rabada finishing with four for 103 and fellow fast bowler Anrich Nortje claiming three for 56.

Maharaj, who broke England's first wicket stand of 92 on Saturday when he dismissed Dom Sibley, took two for 37.

South Africa produced a disciplined bowling performance, making scoring difficult on a pitch which always offered something to the bowlers with some sideways movement and uneven bounce.

England added only 50 runs in 25 overs while losing two wickets during the morning.

Rory Burns took his overnight score of 77 to 84 before mistiming a pull against Nortje to be caught at mid-on, while Joe Denly was leg before wicket to Dwaine Pretorius for 31.

Burns and Denly saw off the threat of Vernon Philander and Rabada but found scoring difficult.

Philander conceded only one run in five overs. Rabada gave up 23 in six overs, which included two hooked sixes by Denly.

Burns, who faced most of Philander's bowling, adding only seven runs off 37 balls. The change to Nortje brought an immediate result for South Africa as Burns attempted to pull the fast bowler's second delivery and sent the ball looping to Rabada at mid-on.

First innings destroyer Vernon Philander sent down three overs with the second new ball but was not making the batsmen play many deliveries, so Du Plessis called on Nortje with immediate success.

Ben Stokes SuperSport Park, Centurion
Get the latest updates on IPL 2020, check out the IPL Schedule for 2020 and Indian Premier League (IPL) Cricket live score . Like us on Facebook or follow us on Twitter for more sports updates. You can also download the NDTV Cricket app for Android or iOS.