Australia ended Day 3 of the first Test against South Africa in Brisbane at 111/3. This was after they had bowled the tourists out for 450. 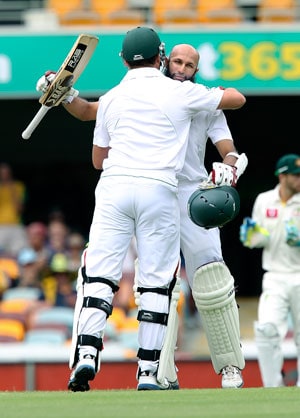 South Africa were on track to end Australia's unbeaten 24-year Test run at the Gabba after dominating the third day's play in the opening Test on Sunday.

The world's number one team amassed a formidable 450 in their first innings and then had Michael Clarke's Australians under pressure at 111 for three in reply at stumps.

Clarke was at the crease on 34 with opener Ed Cowan not out 49 in an unbroken 71-run stand.

The Australians last lost at the Gabba against the West Indies in 1988, but the Proteas' first innings total was the best by a touring side at the ground since England's winning 456 in 1986.

Jacques Kallis had a memorable day, raising his 44th Test century -- he is second on the list of all-time century makers, behind only India's Sachin Tendulkar -- and his fifth against Australia.

The star all-rounder also chipped in with two catches at second slip to help put the skids under the Australians.

The home side's thoughts turned to saving the match after three wickets tumbled inside the opening 10 overs.

David Warner lasted 15 balls before he poked at a Dale Steyn delivery slanted across him straight to Kallis at second slip to depart for four.

Debutant Rob Quiney fell to a spectacular juggling catch on the fine leg boundary rope by Steyn for nine off Morne Morkel.

Steyn tossed the ball into the air realising he was going over the rope and had the presence of mind to step back into the field of play and take the catch.

Senior batsman Ricky Ponting lasted just five balls before he edged Morkel to the safe hands of Kallis for a duck to leave the home side wobbling at 40 for three.

Australia removed Kallis shortly after lunch when Quiney took a high two-handed chance in the gully off James Pattinson to end the allrounder's 349-minute stint at the crease.

Kallis shared in a 165-run partnership for third wicket with Hashim Amla, who reached his third century in four innings against Australia and his 17th overall before he given out lbw to Peter Siddle for 104.

Amla was struck high and TV replays suggested the ball was going over the stumps. Surprisingly, he did not refer Asad Rauf's decision to the third umpire.

The world number two batsman in Tests became South Africa's first triple centurion with an unbeaten 311 against England at The Oval in July.

The Australian bowlers, who eked out just two wickets on Friday's opening day, had their best spell with four wickets in the middle session.

Ben Hilfenhaus wrapped up the Proteas' innings with the wickets of Dale Steyn (15) and Morne Morkel (0) after tea. JP Duminy was unable to bat after rupturing his Achilles on Friday's opening day.

Pattinson was Australia's best bowler with three for 93.

Australia, in the field for over 10 hours interspersed by Friday's washout, were in early strife with South Africa's vaunted pace attack pressing home the advantage to groans from the home crowd.

The first target is to avoid the follow-on target of 251 on Monday's fourth day.