AB de Villiers and Quinton de Kock helped South Africa score 169/4 - a total which proved too much for Bangladesh batsmen. 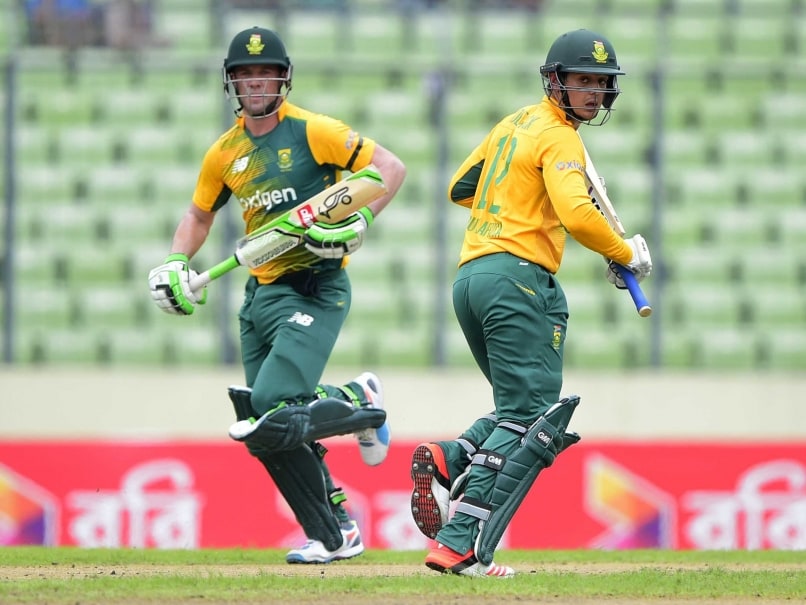 Spinners Eddie Leie and Aaron Phangiso shared six wickets between them as South Africa thrashed Bangladesh by 31 runs in the second Twenty20 international to take the two-match series 2-0 in Dhaka Tuesday. (Scorecard)

Debutant leg-spinner Leie claimed 3-16 and left-arm spinner Phangiso took 3-30, as Bangladesh were all out for 138 runs with five balls remaining in reply to South Africa's 169-4. (Highlights)

Tamim Iqbal and Soumya Sarkar put on 46 runs in the opening stand to give Bangladesh a strong start before Wayne Parnell removed Tamim for 13.

Leie struck in his first over to drag Sarkar (37) out of his crease and had him stumped and then dismissed Mushfiqur Rahim (19) and Sabbir Rahman (one) in successive balls.

Phangiso removed Shakib Al Hasan (eight) off his first ball before taking the wicket of Nasir Hossain who fell for a duck and Litton Das (10) in his next two overs to put South Africa in control.

Paceman Kyle Abbott, who claimed three wickets for 20 runs, completed the rout with wickets off his last two balls.

De Kock top-scored with 44 runs and de Villiers added 40 as the visitors looked for a series sweep after winning Sunday's opening game by 52 runs.

Left-arm spinner Arafat Sunny forced de Kock into chipping a catch to Sabbir at midwicket to earn Bangladesh's first breakthrough in the 11th over.

Bangladesh were immediately back in the contest as Nasir made a double strike in the next over to put a brake on the run flow.

JP Duminy got a leading edge off the second ball of the over to hoist a catch which Shakib gleefully took at short midwicket to remove him for six.

De Villiers gloved the next ball to wicketkeeper Rahim to end his 34-ball innings which included six sixes.

David Miller survived a strong caught behind appeal in the same over to put on 34 runs for the fourth wicket with du Plessis (16).

Miller (30 not out) and Rilee Rossouw (19 not out) then took 32 runs in the last two overs to give South Africa a respectable total.

Nasir finished with 2-26 for Bangladesh.

The two teams will now play a three-match one-day international series, beginning on July 10 at the same ground.

Comments
Topics mentioned in this article
South Africa Cricket Team Bangladesh Cricket Team AB de Villiers Nasir Hossain Cricket
Get the latest updates on ICC T20 Worldcup 2022 and CWG 2022 check out the Schedule, Live Score and Medals Tally. Like us on Facebook or follow us on Twitter for more sports updates. You can also download the NDTV Cricket app for Android or iOS.