South Africa bat out for draw in first Test against Australia

Australia is known for being positive in going for an outright victory and they left no stone unturned to achieve so. Yet, the time on hand was way too less for them to force one. The question South Africa need to answer though is, what if that day was not washed out? 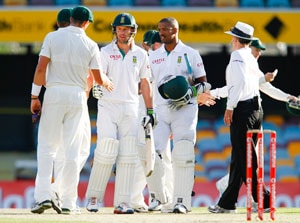 South Africa staved off Australia's push for an unlikely victory to bat out for a draw in the first Gabba Test on Tuesday, though the home team could take heart from having the better of the encounter.

The top-ranked South Africans lost five wickets and effectively were six down with injured JP Duminy unable to bat, but the Australians frustrated by calls going against them could not make further inroads.

At the close after trailing by 115 runs on the first innings, South Africa were 166 for five with AB de Villiers not out 29 and Vernon Philander not out one.

The draw ensured that Australia retained their unbeaten record at the Brisbane ground which stretches back to the West Indies' victory in 1988.

The teams head to Adelaide for next week's second match of the three-Test series all square, but with Australia shading the opening match and having the world's best team under pressure on the final day of their showdown.

"At the end of the day there's no result in this Test match," Australia skipper Michael Clarke said.

"We have to win this series to get back to being the number one Test team in the world, so we have to do our best to push for a win at every opportunity."

The Aussies have now not lost in their last eight Tests under Clarke, while the Proteas, under Graeme Smith, have not lost an away Test match since India at Calcutta in February, 2010.

"There's enough time to reflect and to get one or two things right for Adelaide," Smith said.

"I felt we were ahead of the game going into day four, 40 for three, we just never quite backed up well enough on day four.

"All in all, I think a draw was an even reflection on how the surface played for both teams."

Clarke was named man-of-the-match for his third double-century of the year, his unbeaten 259 which turned the match away from the Proteas over the closing two days.

Kallis was out one short of his half-century when Clarke took a splendid one-handed catch at slip off spinner Nathan Lyon in the 49th over.

Jacques Rudolph survived a vociferous lbw appeal off Siddle before he had scored but umpire Billy Bowden was unmoved amid the excited Australian fielders, but he ultimately went lbw to Lyon for 11 heading into the final hour.

Australia earlier declared their first innings at 565 for five with a lead of 115 in the hope of grabbing early wickets to force an improbable victory on a bat-friendly pitch.

Petersen fell before lunch and tempers boiled over as Australia's bowlers sought a big breakthrough in the middle session before Smith went after a fiery over from James Pattinson. 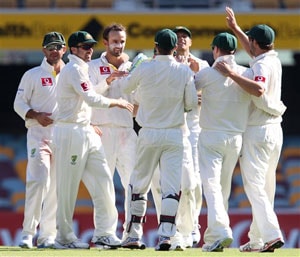 The young firebrand worked over the Proteas skipper before getting a thick edge to Rob Quiney in the gully as he attempted to drive outside off-stump.

Amla survived a second review on 20 after Pattinson appealed for a catch behind and Peter Siddle thought he had his wicket on 28.

But the Australians were unable to seek a review because they had run out of referrals and umpire Asad Rauf had words with a fired-up Siddle after a short sharp exchange with Amla.

Spinner Lyon proved expensive early, going for 26 runs off his two overs before he was removed from the attack.

But Siddle finally got Amla's wicket when he hit firmly to Michael Hussey in the covers for 38, leaving his team 102 for three.

Clarke declared Australia's innings when he was unbeaten on 259 with wicketkeeper Matthew Wade 19 not out.

Clarke eclipsed England's Alastair Cook's 235 not out two years ago as the highest individual score at the Gabba. Don Bradman hit 226 at the ground in 1931.

Australia went after quick runs before the declaration. Hussey had a nervy spell before clinching his 17th Test century and was out for 100 on the next ball he faced from Morne Morkel.