After retiring from international cricket, former India captain Rahul Dravid might not have to deal with critics anymore, but he is continuing to face criticism from unexpected quarter -- his two sons. 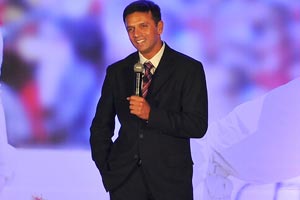 After retiring from international cricket, former India captain Rahul Dravid might not have to deal with critics anymore, but he is continuing to face criticism from unexpected quarter -- his two sons.

The batting legend says his two sons ask him during their regular backyard sessions to bat less like himself and more like Chris Gayle, the 'Gaylestorm', referring to the West Indian's pyrotechnics in the middle.

"I think that truly proves the saying that, in our country, everyone is a cricket critic," said Dravid during a visit here.

Dravid said he was happy not to be spending all his times thinking and contemplating (about the challenges of cricket befacing him) in the last few months.

"I now know the price of onions, tomatoes and sugar on a more or less weekly basis. I am an enthusiastic participant in parent-teacher meetings and in homework sessions, renewing my appreciation for simple routines of lives, rare luxuries during the humdrum life in professional cricket", he said.

Reminiscing his cricketing days, Dravid said cricket has made him a better, well-rounded person and gave him a platform for both professional success and failure.

"On the flip side, my aspiration was always to leave the game better than I found it. I tried my very best to live up to that standard and by playing with integrity and pride. I feel I was able to achieve some of these goals on my own, very personal way," he said.

Dravid said cricket is one of the few unifying things, which has provided him the opportunity to come in contact with people of every background and every sort.

"I have played in many corners of the country where no corporate job would have taken me to. My teammates were from so many different backgrounds. Today, the national team is largely composed of players from small towns and tier-2 cities. The game has truly democratised and captured this diversity. This has been fascinating for me to experience," he said.

Comments
Topics mentioned in this article
Cricket Rahul Dravid Chris Gayle
Get the latest Cricket news, check out the India cricket schedule, Cricket live score . Like us on Facebook or follow us on Twitter for more sports updates. You can also download the NDTV Cricket app for Android or iOS.