Something amiss when I bat in ODIs: Rohit Sharma

Although India's World Twenty20 campaign failed to meet expectations, the tournament did provide some relief to Rohit Sharma, whose place in the Indian limited-overs side was under scrutiny. 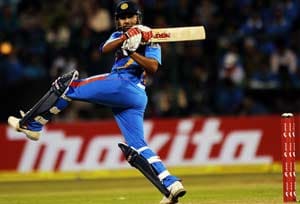 Although India's World Twenty20 campaign failed to meet expectations, the tournament did provide some relief to Rohit Sharma, whose place in the Indian limited-overs side was under scrutiny. An unbeaten half-century against England and a valuable 25 against South Africa in the Super Eights made up somewhat for a miserable One-Day International series against Sri Lanka, which ended early in August.

In an interview with Times of India, Rohit talked about his hopes of translating his T20 success to the longer format. "I enjoy my stints in Twenty20. I sincerely hope I can adapt this to one-day cricket too, and do what I manage to do in T20," said Rohit. "I have succeeded in this format regardless of conditions, batting order and any other factors. I hope it rubs off on other formats too.

"I have realised that something is missing when I am playing ODIs, but I don't know what. I am trying to figure out what is this missing link. I've really not thought about it. I go with the same approach in all formats. There are aspects to my batting that don't necessarily have to change just because I'm playing a different format."

In the ODI series against Sri Lanka, Rohit managed just 13 runs from five games, leading to calls for his axe. Despite his form, he was persisted with and Rohit says he was working hard to repay the faith of the team management. "I have got tremendous support from my teammates and captain. I must have done something right in the past for which I am getting this kind of support. Nobody will back you just like that. And believe me, I'm putting in a lot of effort to repay that faith," said Rohit.

Despite his poor performances, however, Rohit wasn't worried by his form. "To be honest, I'm not worried. In fact, I'm reasonably happy," he said. "I agree the stats are poor, but stats never tell you the exact scenario of the match and the situations in which I have gone in to bat.

"I've opened the batting, batted at numbers 3, 4, 7... I have batted wherever I have been asked to. I am not giving any excuses here and since I'm supposed to be a professional, I'm anyway not allowed such excuses. The tours of Australia and Sri Lanka were disappointing and I also agree I struggled there. As frustrating as it has been for everybody, it's much more frustrating for me."

Comparisons to Virat Kohli are inevitable given how much Kohli has come up since making his debut. Rohit, however, was happy for Kohli and believed he will soon join him in doing well. "I don't believe in any kind of comparison. He is different and so am I," said Rohit. "I am very happy he's doing well and hopefully, I'll join him there soon. As for people who compare, I can't help. People need to see the whole scenario when they compare. Virat is a No. 3 batsman. I bat at No. 4, 5, 6. But he's doing well for India and that's what matters."

He admitted the talk of his talent piles the pressure on him to perform, while claiming "people are impatient" and that he was "only learning things". While admitting it hurt him, Rohit drew inspiration from Yuvraj Singh, who started out as a middle-order batsman before working his way up the order.

"Of course it hurts. If I was an opener, it would've given me time to go out there and figure things out," said Rohit. "I don't want to say I'm a top-order batsman or I'd specifically like to be one. I will bat wherever I am asked to. Yuvraj has been a classic example. He used to bat at No. 6, No. 7 when he first came into the Indian team. Gradually he started batting up the order and runs started coming. Someday I too will learn to deal with it and work my way."

Rohit also revealed he has been working on his fitness with a set regime, something he didn't pay attention to five years back, and said he watches videos of his batting in an attempt to improve.

Comments
Topics mentioned in this article
RG Sharma Virat Kohli Cricket Gary Kirsten Aftab Alam Virender Sehwag
Get the latest updates on India vs Australia Series, check out the India vs Australia Schedule for 2020-21 and Ind vs Aus live score . Like us on Facebook or follow us on Twitter for more sports updates. You can also download the NDTV Cricket app for Android or iOS.