Star India batter Smriti Mandhana was on Friday nominated for the ICC Women's Cricketer of the Year award for her spectacular performances across all formats. 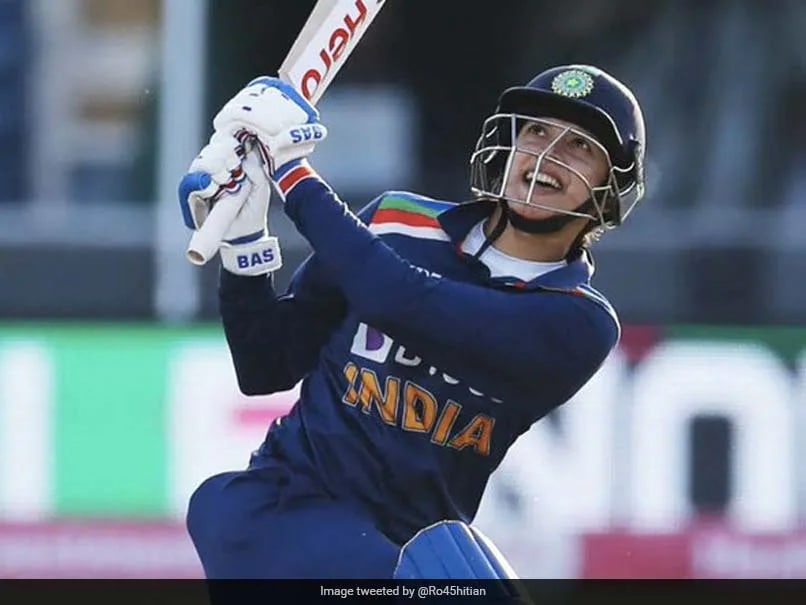 Smriti Mandhana was nominated for the ICC Women's Cricketer of the Year award.© Twitter

Star India batter Smriti Mandhana was on Friday nominated for the ICC Women's Cricketer of the Year award for her spectacular performances across all formats. Mandhana was also nominated for Women's T20 Player of the Year on Thursday. Mandhana was shortlisted for the top award along with Tammy Beaumont of England, Lizelle Lee of South Africa and Gaby Lewis of Ireland. The award is given to the best overall performer in women's international cricket (Tests, ODIs and T20Is) during 2021. The winner will be announced on January 23.

The 25-year-old right-handed opening batter scored 855 runs in 22 international matches across formats during the year at an average of 38.86 with one century and five half-centuries.

In the limited-overs series against South Africa where India won just two of the eight matches at home, Mandhana played a major role in both of the wins.

She scored 80 not out as India chased down 158 in the second ODI that helped them level the series and scored 48 not out in the final T20I win.

Mandhana played a sublime innings of 78 in the first innings of the one-off Test against England that ended in a draw.

She played an important knock of 49 in India's only win in the ODI series. Her 15-ball 29 and fifty in the T20I series went in vain, though, as India fell short in both the matches and lost the series 1-2.

Mandhana was in good touch in the series against Australia, starting with the ODI series where she scored 86 in the second ODI.

She scored a brilliant century in the only Test, the first of her career, and was awarded the Player of the Match. She scored her second T20I fifty of the year in the final match, though India fell short and lost the series 2-0.

She made India's first-ever pink-ball Test even more memorable by smashing her maiden century (127) in the longest format of the game. The match ended in a draw and Mandhana was declared the Player of the Match.

With 872 runs in 21 internationals at an average of 48.44 with one century and eight half-centuries, England's Beaumont finished as the highest run-getter in the calendar year.

In the multi-format series against India, she started with two consecutive half-centuries, the first one coming in the only Test and the second in a Player of the Match-winning effort of 87 not out in the first ODI.

She scored her third half-century of the tour in the second T20I, though it came in a losing effort.

She bagged yet another Player of the Match award in the T20I series opener against New Zealand at home, missing out on a century by just three runs.

She capped the limited-overs tour with a ton that helped England clinch the ODI series 4-1.

South African Lee scored 864 runs in 19 internationals at an average of 57.6 with one century and seven half-centuries.

She was in sensational white-ball form throughout the year, particularly in the ODIs where she finished as the highest run-getter in 2021 with 632 runs in 11 matches as well as the top-ranked Women's ODI batter in the ICC Rankings.

Lee was in great form in the ODI leg of the Indian tour, where she scored two fifties and a hundred in four matches. South Africa won the series 4-1 and Lee was awarded the Player of the Series for her 288 runs.

She then scored another fantastic fifty in the second T20I against India, helping her team wrap up the series with a game in hand.

Ireland's Lewis Lewis scored 624 runs in 15 internationals at an average of 52 with one century and four half-centuries.

She made history at ICC Women's T20 World Cup Europe Qualifier in August when she became the first Irish woman to score a T20I century. The knock of 105 not out came in just 60 balls against Germany.

India Women Smriti Mandhana Cricket
Get the latest updates on Fifa Worldcup 2022 and check out  Fifa World Cup Schedule, Stats and Live Cricket Score. Like us on Facebook or follow us on Twitter for more sports updates. You can also download the NDTV Cricket app for Android or iOS.