With West Indies A providing an opportunity to the seamer to test his skills, Zaheer Khan will be hoping to hit the ground running after a focused training schedule last few months. 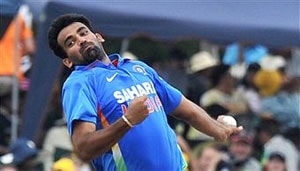 In normal times, Zaheer Khan would never spend the morning before a Test match of four-day match bowling. Anyone who has watched Zaheer closely since his comeback to the Indian team in 2006 will tell you that the day before a game was used for warming up, plenty of dynamic stretching and perhaps some light jogging. Of course, two days before a game and Zaheer would have given it his all in the nets.

But, these are far from normal times. Zaheer, who last played a Test for India against England in Kolkata in December last year, was dropped after bowling 31 unpenetrative overs in which he conceded 94 and picked up the lone wicket of Matt Prior. The zip with the new ball was gone, the old ball would not do what he wanted to. The mind was still very much willing, but Zaheer was both jaded and carrying a few extra pounds.

From Shrirampur to Shimoga, it has been a long journey encompassing 88 Tests in which Zaheer went from being a tearaway quick to one of the most skilful medium pace bowlers in the world. At Shimoga, the next phase of Zaheer's career begins, and the latest journey has taken a couple of interesting detours. Holed up in the south of France, Zaheer rebuilt his body with Tim Exeter, a high performance physical trainer, along with Yuvraj Singh, another Indian cricketer in search of rejuvenation. The experience, which the two described as going to physical hell and back, has certainly done its job. Yuvraj, who jokes that he looks 10 years younger, is back among the runs and in the Indian limited-overs team.

On Tuesday (October 1), there was evidence that Zaheer's time in France, and subsequently South Africa, where he worked with old ally Adrian Le Roux who is attached with the Knights provincial franchise, was well spent. Zaheer began by bowling off two paces, landing the ball in the right spot, and when successive deliveries came out of the hand perfectly, he reverted to the long run. Mohammad Kaif, who was batting at the time, was squared up by a delivery that came in with the arm and held its line neatly after pitching. Zak, indeed, was back.

For close to an hour, Zaheer bowled intermittently at the nets, with no apparent discomfort. The practice pitches at the Jawaharlal Nehru National College of Engineering had just enough bounce to keep the quick men interested and a similar surface for the four-day match will ensure that Zaheer is in business whenever he has the ball in hand.

The test for Zaheer, of course, is not one of skill. That is not something deserts a player in such a short span of time. Physically, Zaheer looked sharp, a slimline version of the cricketer who last played for India. And, as Lalchand Rajput, the coach of the India A team put it, players who are used to performing at the highest level don't take lightly to being left out. "Zaheer looks fitter, more eager and he wants to perform," said Rajput. "Because when a player like him is out of the team, he comes back with that vengeance of wanting to do well."

While West Indies A may suffer momentarily at Zaheer's hands, that thirst for vengeance, as Rajput puts it, will be slaked only when the ultimate goal is achieved: bowling India to victory in a Test match in South Africa later this year, if that tour takes place.

Comments
Topics mentioned in this article
India Cricket Team Cricket
Get the latest updates on ICC T20 Worldcup 2022 and CWG 2022 check out the Schedule, Live Score and Medals Tally. Like us on Facebook or follow us on Twitter for more sports updates. You can also download the NDTV Cricket app for Android or iOS.