Shahid Afridi has decided to go back to first class cricket to regain his lost form. The last one year has been a downward slide for the allrounder with both bat and ball. 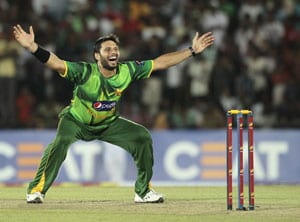 In a bid to get back into form for the upcoming tours to India and South Africa, Pakistan's flamboyant allrounder, Shahid Afridi has decided to end a two year break from first class cricket and appear in the country's premier first class tournament.

A senior official of Habib Bank for whom Afridi plays in domestic cricket said they had been asked by the allrounder to include him in the squad for the first class tournament.

"Initially we had not sent his name in the 20 member squad as he last played first class matches in 2010. But we have now asked the cricket board for special permission to allow us to replace left arm Abdul Rehman with Afridi in the squad," the official said.

He said Rehman's name was sent in the squad and it was removed later on after the spinner was suspended from playing any cricket after failing a dope test in England.

Afridi, who now focuses on just playing ODIs and T20 matches, last played a first class match when he captained Pakistan in the first Test against Australia at Lords in mid 2010.

He announced his retirement from the longer version of the game after that Test and since then has only focussed on limited overs cricket.

Afridi struggled with his form in the recent World T20 Cup scoring just 30 runs in six matches. In ODIs this year, he has scored 182 runs in 16 matches.

His bowling has also not been upto the mark as he took four wickets in the World T20 and has taken 15 wickets at an average of 43 in ODIs this year.

Former test players have advised Afridi to play some first class cricket to regain his form and sources said that chief selector, Iqbal Qasim had told him this would be the only way to regain his confidence for the upcoming tours both of which were high profile for Pakistan cricket.

Comments
Topics mentioned in this article
Cricket Shahid Afridi Gary Kirsten Aftab Alam Virender Sehwag Zulqarnain Haider
Get the latest updates on India vs Australia Series, check out the India vs Australia Schedule for 2020-21 and Ind vs Aus live score . Like us on Facebook or follow us on Twitter for more sports updates. You can also download the NDTV Cricket app for Android or iOS.