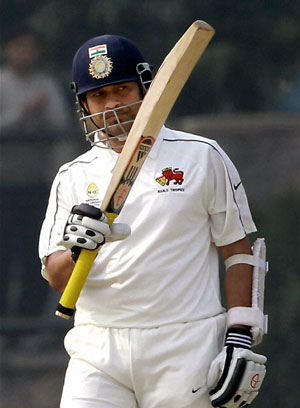 Sachin Tendulkar failed to convert a good start as favourites Mumbai struggled to score runs on a difficult track against minnows Services, ending the first day's play at 198 for six in their Ranji Trophy semi-final match on Wednesday.

Tendulkar made batting look easy on a pitch, which wasn't exactly conducive for a Ranji Trophy semi-final as he scored 56 off 75 balls, studded with 10 boundaries and a six.

While Mumbai's 'Performer of the season', Abhishek Nayar again top-scored with 70 off 160 balls (8x4), the contrast in approach of two batsmen reflected how difficult conditions were for an average domestic player.

There was a particular spot on the track from where the odd-ball jumped a few times and once Tendulkar got hit on the gloves by a rising delivery from Suraj Yadav, he repeatedly scrutinised that portion of the track.

The standout was his couple of straight drives and an on-drive in one over from Nishan. This was after he hit a cover drive, which looked more like a forward defensive push off medium pacer Nazar.

Tendulkar was initially cautious as he went into lunch at a personal score of 19. However, he opened up in the post lunch session, playing some brilliant shots square of the wicket.

Just when he started to get on top of the bowling, Tendulkar played one shot that brought about his downfall.

When left-arm spinner Avishek Sinha was introduced, the first scoring stroke was a straight six, which he didn't time it to perfection though. The very next ball happened to be his last one as he tried a repeat without getting to the pitch of the delivery and Nakul Verma took one of the easiest catches at mid-on.

Along with Nayar, Tendulkar added 81 runs for the fourth wicket after Mumbai were reduced to 23 for three within the first hour of play.

Domestic run-machine, Wasim Jaffer was adjudged caught behind off Nishan but the batsmen didn't look happy, while in-form youngsters -- Kaustubh Pawar (3) and Hiken Shah (0) --were dismissed by Yadav.

Nayar, who has one of the most peculiar batting stance, showed why he has been Mumbai's 'Go-To Man' throughout the season.

At lunch, he scored only two off 43 balls but once Tendulkar was out, he took the responsibility of scoring the runs in the able company of Aditya Tare (26, 121b, 3x4) who was finding it difficult to get going. His innings had a liberal sprinklings of singles and doubles.

The duo added 65 runs for the fifth wicket.

It was Shadab, who once again got Services back on track with twin blows in the 64th over. First it was Nayar, who edged one to Yadav at first slip going for a drive.

Left-hander Ankeet Chavan shuffled too much across towards off-stump as a straight delivery from Shadab clipped the leg-stump bail.

Comments
Topics mentioned in this article
Cricket Sachin Ramesh Tendulkar Cheteshwar Pujara Abhishek Nayar Suraj Yadav A Sinha Soumik Chatterjee Vishal Harishbhai Joshi
Get the latest updates on ICC T20 Worldcup 2022 and CWG 2022 check out the Schedule, Live Score and Medals Tally. Like us on Facebook or follow us on Twitter for more sports updates. You can also download the NDTV Cricket app for Android or iOS.