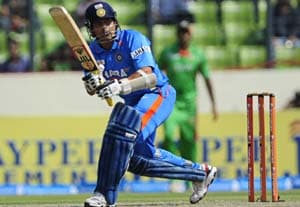 Sachin Tendulkar is the only Indian to make it to the Test dream team drawn up by former England captain Alec Stewart from among players against whom he had played in his career.

"The 'Little Master' is a no-brainer for his extraordinary run-scoring over such a long period of time and the way he has dealt with the pressure of being India's number one sporting icon," Stewart told BBC Sport here on Wednesday.

"I remember a brilliant 165 in his hometown of Mumbai in 1993 and 193 at Headingley almost a decade later. When he got in, his bat just seemed to get wider and wider," added the channel's Test Match Special summariser as part of a special feature.

Two other Indians -- Rahul Dravid and Anil Kumble -- made it to Stewart's broader squad but missed out in the final Test XI.

Stewart, whose Test XI would be captained by Australian Steve Waugh, said West Indian Brian Lara was the best batsman he has played against. His team does not include former Australian captain Ricky Ponting nor the legendary batsman Vivian Richards while the latter's West Indian contemporaries Gordon Greenidge and Malcolm Marshall find places.

Richards and Marshall played their last Test together in 1991 while Greenidge quit the same year but a few months before them.

Stewart explained Richards' omission on the ground that the legendary West Indian's "very best days were just behind him by the time I made my Test debut in 1990".

"During my 14-year career as an international cricketer, I came up against some of the finest players in the history of the game, so to select an XI has not been an easy task.

"I have tried to stick to those who made the greatest impression on matches in which I played," added the English wicketkeeper-batsman who played 133 Tests between 1990 and 2003.

Stewart chose West Indies' Gordon Greenidge and Australia's Matthew Hayden as his openers, followed by Brian Lara, who he describes as the "best batsman I played against bar none".

"He won games single-handedly and his appetite for scoring huge runs - I was on the receiving end of his incredible 375 in Antigua - was insatiable. He looked as though he had come from another planet to teach us all how to bat," Stewart said about Lara.

The only other representative from the Indian sub-continent is Pakistani pacer Wasim Akram for his "genius with the new and old ball".

"There have not been many quicker bowlers than Wasim Akram. He had a dangerous bouncer, was a great competitor and could score handy runs down the order," says Stewart.

The rest of the Dream XI is made up of Jacques Kallis from South Africa, Australians Steve Waugh -- who would captain the imaginary side, Adam Gilchrist (as wicketkeeper) and Shane Warne with West Indians Malcolm Marshall and Curtly Ambrose completing the bowling attack.

"A genuine world-class XI in my opinion but one that was extremely tricky to put together. Like all good selectors, I started out by naming a squad before whittling it down to a starting XI," said Stewart, who named two other Indian cricketing greats -- Rahul Dravid and Anil Kumble -- among the long list that "pained me to have to leave out".

Comments
Topics mentioned in this article
Cricket Sachin Ramesh Tendulkar Alec Stewart
Get the latest updates on ICC T20 Worldcup 2022 and CWG 2022 check out the Schedule, Live Score and Medals Tally. Like us on Facebook or follow us on Twitter for more sports updates. You can also download the NDTV Cricket app for Android or iOS.