Former England cricketer Robin Jackman has been diagnosed with cancer and is to undergo a long therapy session to remove the tumours from his vocal chords. 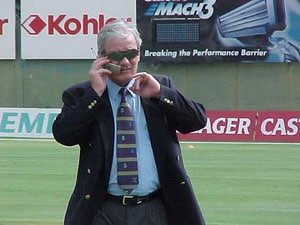 Former England cricketer and now a commentator, Robin Jackman has been diagnosed with cancer and will undergo seven weeks of radiotherapy following two operations to remove malignant tumours from his vocal cords.

The 67-year-old's treatment will be followed by four weeks' rest and he hopes to be back in the commentary box early next year.

"It's not the prettiest, but I got it early and I'm confident I'll be fine," Jackman was quoted as saying in the South African media.

"I won't be in Australia, but I sure will be rooting for the Proteas," he added.

Australia is set to host South Africa in a much-awaited series, starting on Friday.

Jackman played four Tests and 15 ODIs for England, and was involved with Surrey for 16 seasons starting from 1966. He took more than 1400 first-class wickets and scored 5681 runs.

Born in India and grew up in England, Jackman, however maintained close ties with South Africa, coaching and representing Rhodesia and Western Province over 11 seasons.

Jackman's diagnosis comes less than a month after another former England cricketer and commentator, Tony Greig, revealed he was being treated for cancer.