Both Michael Clarke and Ricky Ponting, who announced his Test retirement on Thursday, described the third Test against South Africa as a winner-take-all "grand final" for the top spot. 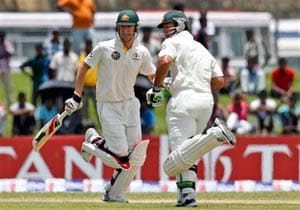 Captain Michael Clarke says Australia will use Ricky Ponting's farewell Test as extra motivation in the series decider against South Africa, with the number one world ranking also at stake.

South Africa will retain top spot with a win or draw after the first two games in the three-Test series ended in draws while the home team need a victory to move back to the number one spot.

Both Clarke and Ponting, who announced his Test retirement on Thursday, described the match as a winner-take-all "grand final" for the top spot.

But the Australians have been rocked by the loss of fast bowling duo Peter Siddle and Ben Hilfenhaus, both ruled out due to fatigue from the second Test in Adelaide, which finished in a tense draw on Monday.

They will also be without fellow quick James Pattinson, who injured his side in Adelaide.

Their absence means at least one of uncapped fast bowling pair Josh Hazlewood and John Hastings will make their Test debut and both could play if the home team elects to go in without a specialist spinner and drops Nathan Lyon.

The final decision will be made on the morning of the match.

Left-armer Mitchell Starc, 12th man for the first Two tests, and paceman Mitchell Johnson, who boasts 30 wickets in four Perth Tests, will both come into the side.

Clarke, who was emotional when discussing Ponting's announcement, said the Australians were determined to send the veteran out on a high by returning to the pinnacle of Test cricket.

"It will only give us more inspiration, there is no doubt about that," he said of Ponting's retirement.

Clarke was confident Australia had the bowling depth to cover the loss of all three of their fast bowlers who featured in Adelaide.

"Both guys are still quite fatigued after Adelaide," he said of Siddle and Hilfenhaus.

"It was a really tough decision, but we need to do what is best for the team. It is about picking the best 11 players to win this Test match and we feel we have got a pretty good stock with the other four fast bowlers in the 12.

"We are still in pretty good hands."

Clarke said he expected Australia to win the Test if they performed at the same level as in the first two matches of the series.

Comments
Topics mentioned in this article
Cricket Australia Cricket Team Ben Hilfenhaus Peter Siddle South Africa Cricket Team
Get the latest updates on ICC T20 Worldcup 2022, check out the Schedule and Live Score. Like us on Facebook or follow us on Twitter for more sports updates. You can also download the NDTV Cricket app for Android or iOS.