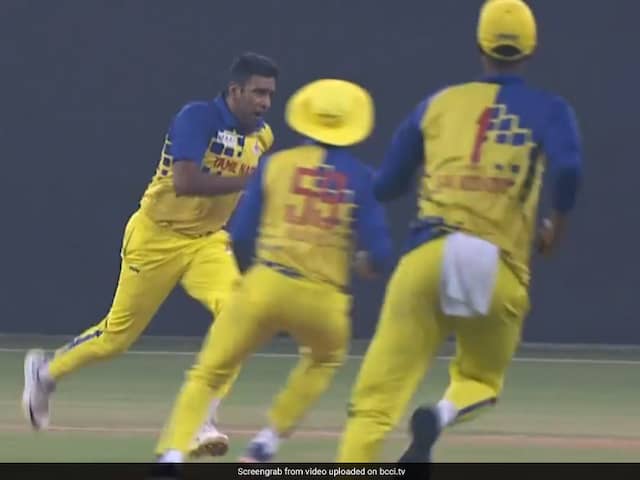 Ravichandran Ashwin picked up two wickets in the final.© bcci.tv

Ravichandran Ashwin, who was on top of his game during the India vs Bangladesh Test series, continued his fine form for Tamil Nadu in the Syed Mushtaq Ali Trophy. Ravichandran Ashwin picked up two wickets in the final against Karnataka and also played an unbeaten knock of 16 runs but failed to help his team win the tournament. The 33-year-old got the key wickets of KL Rahul and Mayank Agarwal in the final and after Ashwin dismissed the latter, he broke into an Imran Tahir-like celebration.

Ashwin and Tahir had shared the Chennai Super Kings (CSK) dressing room in the Indian Premier League (IPL). However, in 2016, Ashwin moved to Rising Pune Supergiant before joining Kings XI Punjab (KXIP) in 2018. He was traded to Delhi Capitals for IPL 2020 earlier this year. Meanwhile, Tahir continues to ply his trade for the Chennai franchise in the lucrative tournament.

Under Ashwin's leadership, KXIP started well in the first half of the past two seasons. KXIP had finished seventh in 2018 and sixth in 2019.

In the Syed Mushtaq Ali trophy final, Tamil Nadu lost by a run to Karnataka. Asked to bat, Karnataka scored 180/5 in the stipulated 20 overs with Manish Pandey top scoring with an unbeaten 60. In response, Tamil Nadu came agonisingly close to chase down the target but missed it by a whisker.

Imran Tahir Cricket
Get the latest Cricket news, check out the India cricket schedule, Cricket live score . Like us on Facebook or follow us on Twitter for more sports updates. You can also download the NDTV Cricket app for Android or iOS.
Advertisement