Ranji Trophy: Uttar Pradesh Hold on to a Draw Against Mumbai

Mumbai were held to a draw by Uttar Pradesh but they gained three points from the clash due to the first-innings lead. 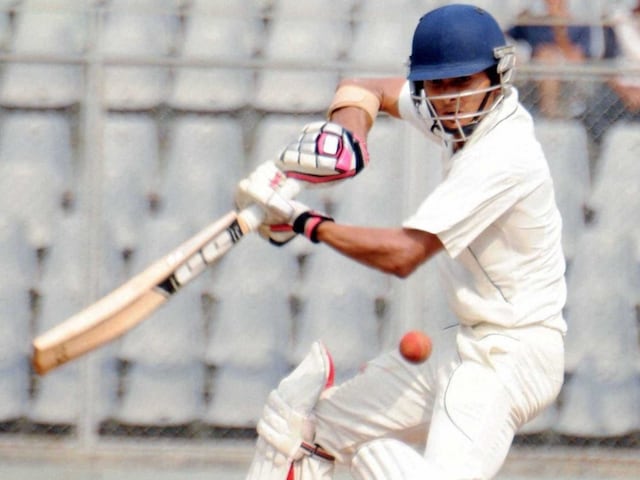 Himanshu Asnora scored a fifty in both innings as Uttar Pradesh held on to a draw against Mumbai at the Wankhede stadium.© PTI
Mumbai:

Uttar Pradesh were bowled out for 440, chasing hosts Mumbai's huge first innings total of 610 for 9 declared, before the Ranji Trophy Group B match ended in a draw here today with the visitors making 140 in the second essay after following on. (Latest Cricket News)

Starting the day at the overnight 350 for five, trailing the home team by 260 runs, UP lost both their overnight not out batsmen Eklavya Dwivedi (66) and Piyush Chawal (88) in the morning session and their slim hopes of gaining the first innings lead fizzled out.

Medium pacer Abhishek Nayar, Mumbai's best bowler of this type on view at the slow-paced Wankhede Stadium track, dismissed both the batsmen before left arm spinner Vishal Dabholkar polished off the tail to bring the UP first innings to an end and give Mumbai a huge lead of 170 runs.

Nayar and Dabholkar finished with four wickets apiece before their captain Aditya Tare asked UP to follow on with a view to try and gain an outright victory.

But the ploy did not work as UP recovered from the loss of an early wicket (Dwivedi for 6) through an unbeaten second wicket partnership of 128 runs between Himanshu Asnora (68 not out) and Umang Sharma (62 not out), who both compiled their second half centuries of the game.

Play was called off by mutual agreement before the start of the mandatory overs.

Mumbai gained three points by virtue of taking the first innings lead and remained on top of Group B with 20 points while UP had 14, including one from this game, to be sixth in the nine-team group.

Mumbai clash next with Railways here from November 15-18 while UP host Tamil Nadu on the same dates.

The Group C Ranji Trophy cricket match between Saurashtra and Goa ended in a draw, with the home team securing three points for taking the first-innings lead, here today.

Goa scored 239 in the first innings and then saw Saurashtra managing to take a crucial lead of 19 runs at the Saurashtra Cricket Association Stadium.

The visitors declared their second innings at 299 for seven in 89 overs. In reply, Saurashtra were 223 for five in 76.1 overs when the stumps were drawn on the fourth and final day.

Opener Avi Barot top-scored for the hosts with 93 off 155 balls, while Amit Yadav was the most successful Goa bowler with figures of 3/52.

Comments
Topics mentioned in this article
MUM UP Piyush Chawla Abhishek Nayar Cricket
Get the latest Cricket news, check out the India cricket schedule, Cricket live score . Like us on Facebook or follow us on Twitter for more sports updates. You can also download the NDTV Cricket app for Android or iOS.