Baroda needed a win to advance to the quarterfinal stage but were simply outplayed by a better pace attack of Rajasthan led by Chahar Singh and Pankaj Singh who took nine and seven wickets respectively in the match at Sawai Mansingh Stadium. 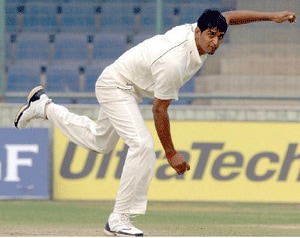 Rajasthan ended their Ranji Trophy campaign on a winning note after defeating Baroda by six wickets in their final Group B league match on the fifth and final day here on Thursday.

Baroda needed a win to advance to the quarterfinal stage but were simply outplayed by a better pace attack of Rajasthan led by Chahar Singh and Pankaj Singh who took nine and seven wickets respectively in the match at Sawai Mansingh Stadium.

The visiting side have already lost the plot yesterday after being reduced to 112 for six and they were ahead by just 15 runs with four second innings in hand when they began today.

Irfan Pathan, 52 overnight, was the lone hand to have given some resistance but none supported him at the other end. His brother and captain Yusuf, who did not take the field for two days due to a bout of fever, was forced to come out and bat but could score just seven.

Chahar added three more wickets to his one yesterday to flatten Baroda's any chance of saving the match. He scalped the wickets of Gagandeep Singh (7), Yusuf Pathan (7) and Murtuja Vahora (3) before Aniket Choudhary ended the match by dismissing Irfan who hit eight fours and five sixes from 118 balls in his innings.

Rajasthan needed 13.4 overs to chase down the small target of 71 and wrapped up the match before lunch although their top order batsmen fumbled in their eagerness to finish early. They lost four wickets in the process.

Rajasthan, who had won the title in successive years in 2010-11 and 2011-12, wrapped up their campaign with two outright victories to finish sixth in the nine-team table with 20 points, same as Baroda, who finished one rung higher only because they had three wins.

Top three teams each from Group A and B and two from Group C make it to the quarterfinals.

Comments
Topics mentioned in this article
Cricket BAR Wasim Jaffer Hrishikesh Hemant Kanitkar Pankaj Singh Irfan Pathan Virat Kohli Paul Valthaty Vikram Solanki
Get the latest updates on IPL 2020, check out the IPL Schedule for 2020 and Indian Premier League (IPL) Cricket live score . Like us on Facebook or follow us on Twitter for more sports updates. You can also download the NDTV Cricket app for Android or iOS.