Former India captain Rahul Dravid backs MS Dhoni to lead the team, and feels that selectors may consider reducing his workload in the future. 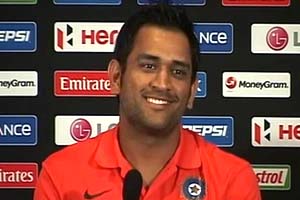 Former captain Rahul Dravid has backed Mahendra Singh Dhoni to remain in the hot seat but felt the selectors can, in the near future, consider reducing the current India skipper's workload in one format to get the best out of him.

"I don't think we want to lose that and if that means at some stage, maybe the time's not right now but in the near future, we have to relieve him of the responsibility from one format to get the best out of him as a player then I think the selectors have to take that call," he added.

Notwithstanding the eight Test defeatsÂ  last year, Dravid said Dhoni should be given a chance to learn from those reverses.

"Dhoni has every right to survive it,Â  because he's Dhoni. He has had aÂ  disappointing last year but he has won India a World Cup, we've been the No. 1 Test side under Dhoni.

"If you put pressure on him so early inÂ  the piece, or if you try to change someone like Dhoni now, I don't thinkÂ  you'll get to see what he's learned from the last year," Dravid was quoted as saying in 'Cricinfo'.

Dhoni has captained India in 203 of his 318 matches across all formats.

The Indian great advised Dhoni that heÂ  should not just look forward to the upcoming series against England and Australia, but also start thinking about India's overseas tours next tours.

"He has got to have an eye on some of the challenges he faces in his career, to be seen as a good overseas captain as well. That will be a function of the team he gets, but he's got to try and have an influence on the kind of team he gets, the kind of personnel he wants and that's a process that he's got to start now.

"It's a process of communication and negotiation with selectors, coaches, working on some of the skill-sets of some of the bowlers and young batsmen coming through on what is required in a year's time.

"So while he has a micro view of what needs to be done in these (home) series, he needs to discuss with the selectors about the kind of players he wants in South Africa and entrust them with the job of actually finding those players in domestic cricket," Dravid said.

He also saw Virat Kohli as a future captain, provided he was able to extend the success he has had for another year.

"In the next 12 months, if he has the kind of 12 months he has had and establishes himself in all three formats of the game, people are going to seriously have to look at him."

Comments
Topics mentioned in this article
Cricket Rahul Dravid MS Dhoni India Cricket Team
Get the latest Cricket news, check out the India cricket schedule, Cricket live score . Like us on Facebook or follow us on Twitter for more sports updates. You can also download the NDTV Cricket app for Android or iOS.