Pradeep Sangwan, who played for Kolkata Knight Riders in the 2013 edition of the Indian Premier League, was the first Indian professional cricketer to be banned after banned substances were found in his urine sample. 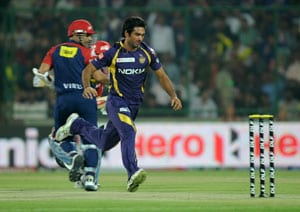 A file pic of Pradeep Sangwan.

It couldn't have been a better birthday gift for Delhi's left-arm seamer Pradeep Sangwan as he received an e-mail from the BCCI confirming that his 18-month long doping ban has been lifted and that he can resume training with his state team.

"Yesterday was my 24th birthday and a day before that I got an e-mail from BCCI. They have confirmed that my ban has been lifted. BCCI has confirmed that all my latest urine sample reports have come negative. During the ban, I was not permitted to train or use any state association facilities. Now that the ban is over, I can at least train with the Ranji team," a relieved Sangwan told PTI.

Sangwan, who played for Kolkata Knight Riders in the 2013 edition of the Indian Premier League, was the first Indian professional cricketer to be banned after banned substances were found in his urine sample.

One of the heroes of India U-19 team's 2008 World Cup triumph, Sangwan wants to forget the past and look ahead.

"I can tell you that it was painful time away from the game. But I had a lot of support from all quarters. During the 18 months, I got time to fix my shoulder problem as I underwent a surgery in UK. After that I concentrated in an extensive rehabilitation programme. I used to just count days when I would return to the field and devoted my time in rehab," said Sangwan, who, as a 17 year-old, took 33 wickets in Delhi's last successful Ranji Trophy campaign back in 2007-08.

The speedster, who has 123 wickets from 38 first-class games, however went on the decline despite being touted as a special talent. He is now ready to make a comeback.

"In the past few years, the shoulder problem led to some technical glitches in my bowling. I had the natural ability to bowl both in swing and outswing but I lost a lot of zip. To swing the ball, you need good shoulder along with wrist position. With my shoulder troubling me, my performance went down. Now I am hundred percent fit and waiting to get back to performing for Delhi," said Sangwan.

During his time in the wilderness, Sangwan said that he got a lot of support from senior players like Virender Sehwag, Ashish Nehra and Gautam Gambhir.

"Viru paaji, Gautam bhaiya and Ashish bhaiya used to call me up and tell me that my focus should be on proper training once my rehab was complete. I was bowling at the nets at the academy run by my coach A N Sharma."

His contemporary Virat Kohli is leading India and another teammate Ravindra Jadeja is an important member of that side.

Does he feel bad about it and Sangwan said, "Not at all. In fact Virat and Jaddu's presence in the senior Indian team motivates me. We have played for India U-19s together. I question myself that I am 24 only and if they can play for India, why can't I?," said Sangwan.

Comments
Topics mentioned in this article
Pradeep Sangwan Cricket
Get the latest updates on IND vs NZ 2021, check out the Schedule and Live Score . Like us on Facebook or follow us on Twitter for more sports updates. You can also download the NDTV Cricket app for Android or iOS.