Pat Cummins to train with Australia A squad in UK

Cummins developed back soreness during the Twenty20 Champions League in South Africa last year and was then diagnosed in November with an early stage stress fracture. 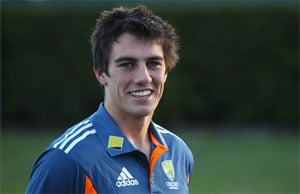 Emerging fast bowler Pat Cummins will travel with the Australia A squad to the British Isles as part of his ongoing rehabilitation programme, Cricket Australia said on Friday.

But CA Executive General Manager Pat Howard said Cummins, 20, will not be added to the squad and will not play in any tour games.

Instead he will continue to work on his "customised programme" with Centre of Excellence Head Coach Troy Cooley's guidance, Howard said.

Cummins developed back soreness during the Twenty20 Champions League in South Africa last year and was then diagnosed in November with an early stage stress fracture.

He has not played since in either domestic or international matches.

"Depending on his continued progression, he may play in intra-squad and warm up matches if this is deemed appropriate based on his workloads, but there is no intention for Pat to play in any of the tour games," Howard said.

He added that Cricket Australia saw it as a priority to continue Cummins' progression as a fast bowler.

"The aim is to have Pat available and prepared for Australia A series in South Africa in July/August," Howard said.

Cummins has a history of injuries since a man-of-the-match bowling performance in his only Test, against South Africa in Johannesburg in November 2011, and is seen as one of Australia's most exciting prospects.

The Australia A squad will leave for the British Isles tour on May 25 and play matches in Scotland, Ireland and England beginning June 7.

Comments
Topics mentioned in this article
Cricket Shane Watson Mitchell Johnson James Pattinson Pat Cummins TJ Cooley
Get the latest updates on ICC T20 Worldcup 2022 and CWG 2022 check out the Schedule, Live Score and Medals Tally. Like us on Facebook or follow us on Twitter for more sports updates. You can also download the NDTV Cricket app for Android or iOS.