Fawad Ahmed, an asylum seeker in Australia from Pakistan, turned up at the nets to help the Australian cricket team to combat leg-spin bowling as they geared up for the first Test starting on Friday. 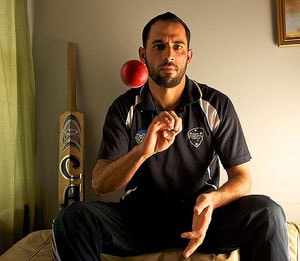 Australia on Tuesday used the leg-spin bowling of a Pakistani asylum seeker in their first net practice session ahead of this week's first Test against South Africa in Brisbane.

Fawad Ahmed, who is awaiting a decision from the Australian government about his refugee protection claim, bowled against Australia's top batsmen as a preparation for South African spinner Imran Tahir ahead of Friday's Gabba Test opener.

Ahmed, who plays Melbourne club cricket and has previously bowled in nets sessions to Australia's batsmen, was flown to Brisbane due to the similarities of his bowling action with that of Pakistan-born Tahir, team officials said.

Ahmed is familiar with naturalised South African Tahir, having played against him when they were both in Pakistan's domestic cricket.

He left his home in the border region near Afghanistan to come to Australia on a short-stay visa to play cricket in 2010.

Despite a temptation to play a four-man pace attack on what is expected to be a bouncy Gabba wicket, South Africa have said they are planning to play Tahir, who has played 10 Tests for the Proteas.

All of Australia's players took part in Tuesday's first training session at the Gabba, including Rob Quiney, who is set make his Test debut as a replacement for injured allrounder Shane Watson.

Comments
Topics mentioned in this article
Cricket Australia Cricket Team South Africa Cricket Team Fawad Ahmed
Get the latest updates on IPL 2021, IPL Points Table , IPL Schedule 2021 , live score . Like us on Facebook or follow us on Twitter for more sports updates. You can also download the NDTV Cricket app for Android or iOS.