The opening day of the first Test saw 12 wickets fall as Pakistan closed at 59/2. 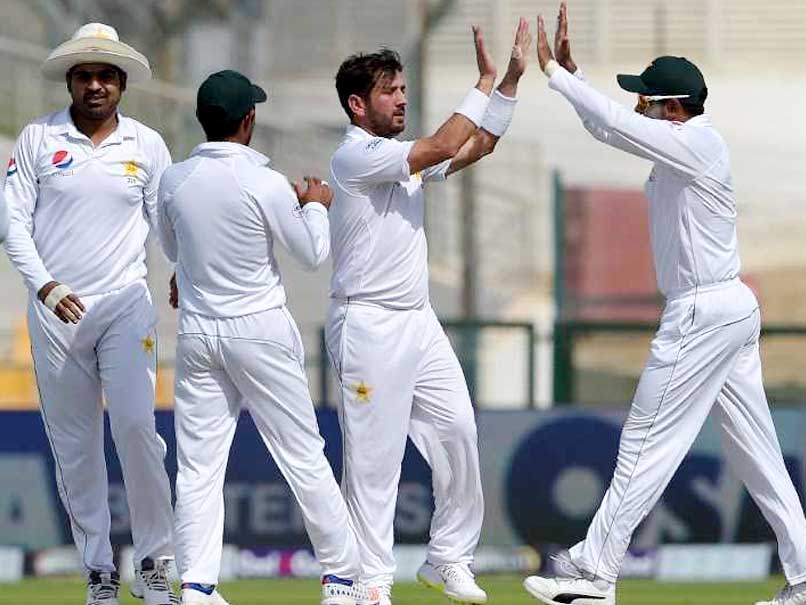 Leg-spinner Yasir Shah led a double-barrelled attack of spin and pace to leave Pakistan sitting comfortably on the opening day of the first Test against New Zealand on Friday. Yasir spearheaded Pakistan's wicket-taking with 3-54 as New Zealand, who won the toss and batted on a grassless Sheikh Zayed Stadium pitch, were bowled out for a below-par 153 in 66.3 overs at the stroke of tea. The day saw 12 wickets fall as Pakistan closed at 59-2, having lost both their openers, Imam-ul-Haq (six) and Mohammad Hafeez (20), before Haris Sohail and Azhar Ali stopped the rot.

Pakistan need 94 more to take a lead and go one up in the three-match series.

Imam was first to go as he edged Colin de Grandhomme's delivery to the slip while Hafeez miscued a pull straight to short mid-wicket -- both caught by Kane Williamson.

Hasan removed Williamson with a slower delivery as the New Zealand skipper went for a hook and gloved the ball for wicketkeeper Sarfraz Ahmed's fourth catch of the innings.

Williamson's 112-ball knock had five boundaries and he added 72 for the fourth wicket with Henry Nicholls who made 28 with four boundaries.

In the same over Hasan trapped De Grandhomme for a first-ball duck before Sohail dismissed Ish Sodhi (four) and BJ Watling (four) -- both were trapped leg-before.

Mohammad Abbas, who has figures of 2-13, had removed Nicholls, caught behind by Sarfraz soon after lunch.

Pakistan dominated the first session as New Zealand were 81-3 at lunch, with leg-spinner Yasir Shah taking the first of his two wickets in his opening overs.

Yasir had derailed New Zealand's progress in the first session with the wickets of opener Tom Latham (13) and Ross Taylor (two) in his first spell.

Yasir said he changed his strategy.

"I was just trying to bowl a bit slower and with flight," said Yasir. "I was not getting wickets after coming back from injury so all went well for me.

"Now we should build a big lead as, I believe, the pitch was ease out and batting will not be tough."

Yasir, who had to endure a tough last week due to the death of his mother, had Latham caught at mid-wicket off a loose drive with the fourth ball of his first over.

In his fourth over Yasir had Taylor caught behind with a sharp leg-break, leaving New Zealand at 39-3.

Yasir Shah Cricket
Get the latest updates on India vs South Africa and check out  Schedule, Results and Live Score. Like us on Facebook or follow us on Twitter for more sports updates. You can also download the NDTV Cricket app for Android or iOS.