The first two matches, which Pakistan won by seven and two wickets respectively, were played in Abu Dhabi before Sri Lanka flew to Lahore in a 24-hour fly in, fly out arrangement. 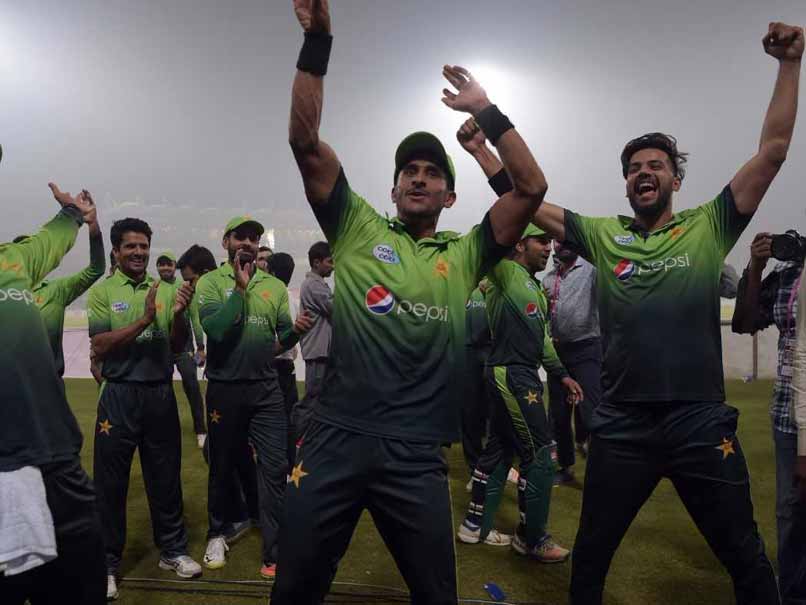 Pakistan blanked the Lankans 3-0 in the Twenty20 series.© AFP

Pakistan marked the return of Sri Lanka with a 3-0 Twenty20 series whitewash on Sunday, as officials hoped the match will help reestablish the country's reputation for hosting international cricket. The third and final Twenty20 match, which Pakistan comfortably won by 36 runs at Gaddafi stadium in Lahore, was Sri Lanka's first since their team bus was attacked near the same venue in March 2009.

Those attacks, which left eight people dead and seven Sri Lanka players and their staff injured, suspended international cricket in Pakistan and forced them to play at neutral venues of United Arab Emirates (UAE).

The first two matches, which Pakistan won by seven and two wickets respectively, were played in Abu Dhabi before Sri Lanka flew to Lahore in a 24-hour fly in, fly out arrangement.

The match was the fourth international since the attack, with Zimbabwe playing a five-match limited overs series in 2015 followed by the final of Pakistan Super League and a three-match Twenty20 series with the World XI comprising of players from seven countries -- both this year.

Sri Lanka Cricket President Thilanag Sumathipala vowed his board will not leave Pakistan in isolation.

"We are happy and privileged to be here to support Pakistan cricket," said Sumathipala. "It's a wonderful cricketing nation. Pakistan has done so much for world cricket and to sports in general so we cannot leave them in isolation."

However, a rampaging Pakistan side did not show any mercy to their opponents as they piled up 180-3 in their 20 overs.

Shoaib Malik, the only player from both the sides to have also featured in the fateful 2009 Lahore Test, smashed a 24-ball 51 with five boundaries and two sixes.

He added 75 for the third wicket with Babar Azam (34 not out) in just 45 balls. Openers Umar Amin (37-ball 45 with a six and three boundaries) and Fakhar Zaman (27-ball 31 with three fours) were the other contributors.

Pace bowler Mohammad Amir, playing his first international match before the home crowd after making his debut soon after the terrorists' attacks, finished with a career-best 4-13 as Sri Lanka managed 144-9 in 20 overs.

Only Dasun Shanaka batted with aggression during a 36-ball 54 with five boundaries and three sixes before he became one of Faheem Ashraf's two wickets.

This becomes Pakistan's second 3-0 whitewash in a Twenty20 series, having previously beaten the West Indies in UAE last year.

Thousands of fans filled Gaddafi Stadium under intense security, as the countries' respective national anthems were played before a capacity 23,000 crowd. The city was adorned with pictures of the Sri Lankan cricketers as fans converged on the stadium hours before the start of the match.

Fans applauded both the teams before the start of the match and beat drums in an exhilarating atmosphere.

Sethi hoped Sri Lanka's return will be followed by a three-match Twenty20 series with the world champions, West Indies, next month, which is due to be finalised in the next few days.

"I thank Sri Lankan team for coming to Pakistan as it was a great gesture," said Ahmed. "It was lovely to play before home crowds and win."

"We want to thanks the Pakistan fans for inviting us," said Perera. "We love you and it was an honour to lead this young side."

Comments
Topics mentioned in this article
Pakistan Cricket Team Sri Lanka Cricket Team Sarfraz Ahmed Thisara Perera Cricket
Get the latest updates on India vs South Africa and check out  Schedule, Results and Live Score. Like us on Facebook or follow us on Twitter for more sports updates. You can also download the NDTV Cricket app for Android or iOS.