The protesters in Bangladesh have targeted Pakistani nationals living there, calling for a ban on goods from the country and also to sever diplomatic ties with their neighbours. 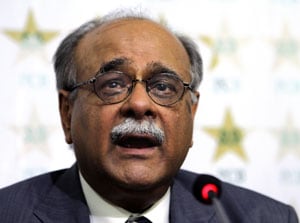 Pakistan cricket team's participation in the upcoming Asia Cup and the ICC World Twenty20 events in Bangladesh will depend on the central government's approval, PCB's interim management committee on Thursday said.

The decision was taken at a meeting of the all-powerful committee here.

Though the PCB released a very carefully worded statement on the meeting, but insiders told PTI that all the members were unanimous in their decision that no risk should be taken on sending the team to the two events in Bangladesh, which is in political and security turmoil.

The protesters in Bangladesh have targeted Pakistani nationals living there, calling for a ban on goods from the country and also to sever diplomatic ties with their neighbours.

"The interim management committee (IMC) was given a detailed update on the Asia Cup and the ICC WT20 in Bangladesh. The committee deliberated on the current political situation in Bangladesh, particularly with regard to the protests against Pakistan and agreed to consult ICC and ACC in this matter and to also hold discussions with the government," the PCB statement said.

The IMC, which was consituted by the Prime Minister to run cricket affairs in Pakistan, met under the chairmanship of Najam Sethi and was attended by members Shaharyar Khan, Naveed Akram Cheema, Zaheer Abbas, Haroon Rashid and Subhan Ahmad (Chief Operating Officer, PCB).

"Zaheer, Shaharyar, Haroon and Cheema, who are senior members of the committee, said that the board should only send the team to Bangladesh once they get full security assurance from the Asian Cricket Council and the ICC," a source said.

"It was also decided that the government's advice shall be sought on the matter and a decision regarding the cricket team's participation shall only be taken after that," the source added.

He said Sethi briefed the members that the ICC and ACC were monitoring the situation in Bangladesh and would decide on alternate venues later this month.

"Sethi said the ICC executive board is due to meet on January 25th in which a decision on whether to hold the World T20 in Bangladesh or shift it to other venue would be taken," he said.

Comments
Topics mentioned in this article
Zulqarnain Haider Virender Sehwag Gary Kirsten Cricket Aftab Alam
Get the latest updates on IND vs NZ 2021, check out the Schedule and Live Score . Like us on Facebook or follow us on Twitter for more sports updates. You can also download the NDTV Cricket app for Android or iOS.