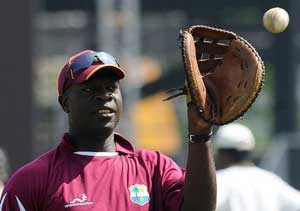 Former West Indies head coach Ottis Gibson has been appointed as a bowling coach for England on a temporary basis.

Gibson will participate in a fast-bowling performance camp in South Africa this winter, his first involvement with the game since his departure as head coach of the West Indies in August, reports CMC.

He will work alongside the lead fast-bowling coach, Kevin Shine, while the senior team's bowling coach, David Saker, takes a break before a relentless 2015.

England have stressed that Gibson's appointment is only on a short-term basis during the fast-bowling camp, which will be attended by seven players of varying experience

They include established international Liam Plunkett to the Surrey rookie Matthew Dunn.

The camp will run from November 21 to December 10 in Potchefstroom, signalling Gibson's return to international cricket and the England setup.

The 45-year-old Barbadian has earned a reputation after taking the West Indies to the World Twenty20 title in 2012 and before that in four years working with Peter Moores and Andy Flower in the England set-up.

Gibson left as head coach of West Indies two months ago amid some acrimony officially by mutual consent although he continues to insist that he was sacked by the West Indies Cricket Board.

Comments
Topics mentioned in this article
Ottis Delroy Gibson England Cricket Team Cricket
Get the latest updates on IND vs NZ 2021, check out the Schedule and Live Score . Like us on Facebook or follow us on Twitter for more sports updates. You can also download the NDTV Cricket app for Android or iOS.