Srinivasan © AFP In his letters, Aditya Varma urged the Prime Ministers to intervene and direct their respective cricket boards to get together and stall N Srinivasan from becoming the chairman of the ICC. 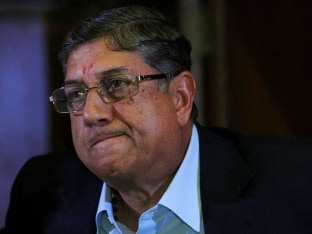 Cricket Association of Bihar (CAB) secretary Aditya Verma is taking his fight against Narayanswamy Srinivasan a notch ahead, shooting off letters to the Prime Ministers of India, England and Australia, on Monday.

In his letters, he urged the Prime Ministers to intervene and direct their respective cricket boards to get together and stall Srinivasan from becoming chairman of the ICC.

"When the whole world, including the highest court of India, found that something was seriously wrong with Mr Srinivasan, why did your countries' top cricket board officials accept the creation of a special post for him as chairman of the ICC and elected him unopposed?" Verma asked in the letter addressed to the Prime Ministers of the three nations.

Addressing a media conference, here, at the Calcutta Sports Journalists' Club, Verma said: "I wrote the letters to the concerned Prime Ministers because India, England and Australia are the powerhouses of world cricket.

"If the Prime Ministers of these three nations put pressure on their respective Boards, I think Srinivasan can be removed."

He also appealed to the Board of Control for Cricket in India (BCCI) and its affiliated units not to nominate the "tainted" Srinivasan. "If I don't get a reply from the BCCI and the 30 state associations within a week, I will take them to court as well."

Verma also added that his battle against Srinivasan was actually an offshoot of his long struggle to earn affiliation back for the Cricket Association of Bihar, which was de-recognised by BCCI back in 2001.

"I will continue to fight till I help CAB earn the status back," said Verma.