No-balls were the bowlers' main nemesis in the first Test between South Africa and Australia in the Gabba with as many as three dismissals overturned. 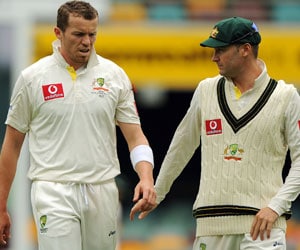 Three times in the first Gabba Test -- with Australia denied twice and the Proteas once -- a wicket was denied by the third umpire's technology after the bowler marginally overstepped with his front foot.

There was a flashpoint on Tuesday's final day when South African star batsman Hashim Amla, on seven, chopped a James Pattinson delivery on to his stumps as the tourists were under pressure at 26 for one.

Pattinson's heel was judged just over the popping crease after replays and the third umpire made the correct call to let Amla stay out in the middle.

Fellow Australian paceman Peter Siddle was denied in the same manner against Jacques Kallis on day one while Proteas quick Morne Morkel was the victim of a dubious call when Ed Cowan gloved down the leg-side late on day three.

Australian skipper Michael Clarke, while surprised at the number of contentious no-balls, backed the umpires.

"I think it makes sense. Any time you bowl a no-ball front foot it should be picked up," he said.

"The umpires on the ground are doing their best, they're probably making extra sure when a wicket falls so I'd rather see them picked up than guys bowling the no-balls and getting away with the wicket.

"For there to be so many there must have been reasons. We have been quite disciplined with our no-ball front foots, we work hard at training on it, and we'll continue to do that with preparation for Adelaide (the second Test)."

The amount of no-balls proved a bigger problem for South Africa at the Gabba as Morkel also had another wicket -- when Michael Clarke was on 135 on his way to an unbeaten 259 -- denied when he edged behind on day four.

The Proteas bowlers over-stepped 23 times in Australia's first innings of 565 for five declared while Australia bowled six no-balls as the Proteas made 450.

"From our perspective, it's not acceptable and the guys know that. There's a good personal responsibility there and it's something that needs to be improved upon."