Pakistan captain Misbah-ul Haq Saturday praised the Afghan team's fighting spirit despite their loss in a one-day international to his side, saying they could give other teams a tough time. 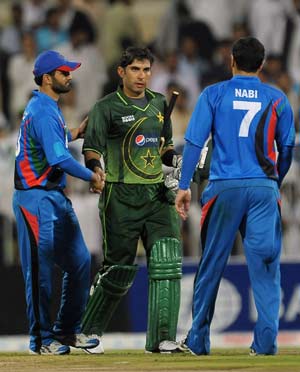 Pakistan captain Misbah-ul Haq Saturday praised the Afghan team's fighting spirit despite their loss in a one-day international to his side, saying they could give other teams a tough time.

Pakistan beat Afghanistan by seven wickets in the first-ever one-day international between the two countries here on Friday.

Despite losing, Afghanistan put up a spirited show before a 15,000-strong crowd, hitting six sixes in their 195 and taking two early wickets when Pakistan batted.

Misbah said he was impressed by Afghanistan's performance.

"It was a good game. The way the Afghanistan team played I am really happy. They have some really good, exciting cricketers," he said, adding it was "a good beginning" for the Afghan side.

Afghanistan earned one-day status in 2009 and have since achieved several milestones, qualifying for the World Twenty20 in the Caribbean and finishing silver medallists in the Asian Games in China, both in 2010.

They also won the Inter-Continental Cup, meant for associate teams, in 2010.

"I think Afghanistan can give tough time to Zimbabwe, Bangladesh and even to better teams. It is all about experience and if they play more cricket against good teams in the world, they are going to improve."

Misbah said Afghanistan were a dangerous limited over side.

"T20 or for one-day, this is a dangerous side. They can still improve and they have excellent fighting spirit. They put in a lot of effort in fielding."

Paceman Dawlat Zadran then dismissed opener Mohammad Hafeez (eight) and Asad Shafiq (20) before Younis Khan (70 not out) and Imran Farhat (52) saw Pakistan through in the 38th over.

"Their fast bowlers bowled really well and their batting start was very good. I think on this wicket batting was not easy and the score of 195 was really good because even Sri Lanka had struggled on this wicket last year," said Misbah.

"They have many positives to take from this game."

Afghanistan captain Nawroz Mangal said he was satisfied with his team's performance.

"Our start was very good. Unfortunately the middle order collapsed and that prevented us from making a big score but we got two early wickets and overall I am satisfied with my team's performance against a top side," said Mangal.

Mangal, 27, said there were several lessons for his team.

"We learned a lot from this game. The most significant thing which we learned from this game... is the maturity how to play a one-day game, especially against a tougher side."

Afghanistan will play in the World Twenty20 qualifiers in the United Arab Emirates next month.