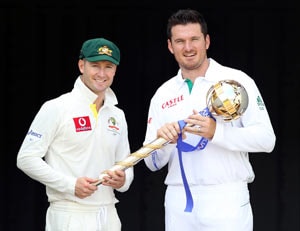 The tourists have only brought four pace bowlers to Australia and Clarke senses an opportunity to erode their effectiveness throughout the three Tests.

Clarke, who has still to decide on his own bowling attack, wants batsmen to occupy the crease for long periods to test the physical endurance of Steyn, and Philander.

"It's certainly the hardest time to bat against the bowler's first spell," Clarke told a Test-eve press conference in Brisbane on Thursday.

"The longer they are out in the field the heavier their legs become so as a batting group we're really keen to spend as much time out in the middle as possible.

"They have only four fast bowlers in their touring party and if we can make them spend as much time in the field as possible, hopefully that we will put us in good stead for the next two Tests."

Steyn, 287 wickets in 57 Tests, and Philander, 63 wickets in just 10 Tests, are likely to be backed up by Morne Morkel, all-rounder Jacques Kallis and leg-spinner Imran Tahir in South Africa's first Test in Brisbane in 49 years.

"They are experienced and they have a very good attack," Clarke said.

"We know we have to be at our best and we're prepared for that, we know what's coming, we know what we are about to face and we're excited about the challenge."

Clarke is keen to return fire with fire and didn't shy away from talk that his side's pacemen will be peppering Graeme Smith's side with short-pitched deliveries on the greenish Gabba pitch.

"I wouldn't be surprised if you saw plenty of short stuff, that's for sure," Clarke said.

"When you have four guys who have bowled over 140 kph (87 mph), they're not shy of bowling bouncers.

"The young quicks know what they have to do, but I've made it very clear they need to keep the same aggression they had last summer against India.

"We know there is a line that you can't cross, but we'll be pushing that line."

Clarke said former skipper Ricky Ponting was fit to play after being troubled by hamstring soreness, while Test debutant Rob Quiney will bat at number three.

Although South Africa have the greater Test experience, Clarke is confident his side can protect their formidable record at the Gabba where they haven't lost for 24 years since falling to the West Indies in 1988.

"We've got enough talent as any team in the world, especially as young fast bowlers, but it's about execution. If you don't execute your plans you won't take wickets," Clarke said.

"We beat a very strong Indian team 4-0 here last summer and our plans and processes have been no different. Our preparation has been exactly the same, obviously different opposition and we've looked at that.

"The wicket looks good. There might be a little bit in the wicket on day one, but the Gabba generally turns into a pretty good batting wicket."