Injured Australia captain Michael Clarke will be fit to play the first Test against the West Indies, selectors said on Wednesday as they named a squad that saw the return of spinner Michael Beer. 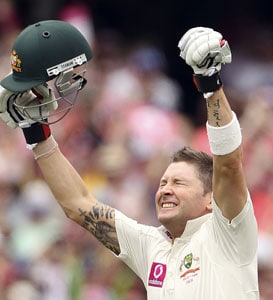 Injured Australia captain Michael Clarke will be fit to play the first Test against the West Indies, selectors said on Wednesday as they named a squad that saw the return of spinner Michael Beer.

Clarke was ruled out of the one-day series in the Caribbean that starts Friday after injuring his hamstring in a tri-series clash against Sri Lanka earlier this month.

But after intense treatment, he was included in the 16-man Test squad.

"It is anticipated Michael Clarke will be fully recovered and take his place as captain for the first Test match in Barbados beginning on Saturday April 7," said national selector John Inverarity.

Shane Watson and James Pattinson were both given recalls after their injury-marred Australian summers but batsman Shaun Marsh remains on the outer after poor form.

The biggest surprise was the return of Beer, who is yet to add to his one Test against England in January last year.

Forrest and Wade will make Test debuts if they play.

He added that it would also provide cover for any injuries that may occur in a country not easily accessible by replacement or standby players.

Teenage paceman Patrick Cummins remains unavailable due to fitness concerns, having missed the entire Australian summer with a foot injury.

Following on from the Barbados Test, Australia play a second Test at Port of Spain in Trinidad and a third at Roseau, Dominica.

Comments
Topics mentioned in this article
Cricket Michael Beer Ricky Ponting Gary Kirsten Ravi Rampaul MS Dhoni Bangladesh Cricket Team Michael Clarke
Get the latest updates on IPL 2020, check out the IPL Schedule for 2020 and Indian Premier League (IPL) Cricket live score . Like us on Facebook or follow us on Twitter for more sports updates. You can also download the NDTV Cricket app for Android or iOS.