Wade has a confirmed spot in Australian squad

Matthew Wade has a week to contemplate his receipt of a baggy green cap after the national selectors guaranteed his place as Australia's wicketkeeper for the first Test against West Indies in Bridgetown. 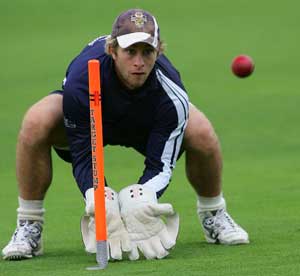 Matthew Wade has a week to contemplate his receipt of a baggy green cap after the national selectors guaranteed his place as Australia's wicketkeeper for the first Test against West Indies in Bridgetown.

In naming the team for a three-day fixture against a West Indies Board XI at the Three Ws Oval from Monday, the national selector John Inverarity rested Wade, David Warner and Michael Hussey - all three tagged for major roles against the hosts in the three Tests to follow. Peter Nevill will take the gloves in the tour match and thus walk his first steps in the national team uniform, but short of a bad training accident it will be Wade who dons the gloves at Kensington Oval from Saturday in the absence of Brad Haddin.

Though he was always the next man in line once Haddin was forced home by personal reasons to be with his family in Sydney, Wade's displays in the limited-overs matches have oscillated between the capable and the awkward. However he will gain confidence from the knowledge that his Test place is now certain.

The match offers the returning captain Michael Clarke and numerous others a chance to get acquainted with Caribbean cricket. Ed Cowan, Ricky Ponting, Peter Siddle, Ryan Harris and Michael Beer will all play their first active part in the tour, Beer allowed to bowl though nominal 12th man for what is a non-first-class engagement.

There is a buoyant mood around Barbados about the prospects of Darren Sammy's team following tied ODI and Twenty20 series, in which Australia's cricketers were confounded by opponents who demonstrated far more resilience than may have been anticipated. While three Tests promise to offer a much more complete examination of a team, the Australians have grown rather more guarded about the battles to be fought across the next month in Bridgetown, Port of Spain and Roseau.

Ponting, who first toured the West Indies in 1995 and has witnessed both memorable victories and stunning defeats in the region, said the team had spoken frankly of the task ahead following the undulating path followed during the limited-overs leg of the tour.

"[It is] hard to make judgements on them after just one-day cricket and Twenty20 cricket," Ponting said. "The thing that always tests out countries without great depth is Test match cricket. The Kiwis are probably a really good example of that, In Twenty20 and one-day cricket they're always very competitive but once the longer version of the game comes around they find it hard to win games.

"You've got to give the Windies credit for what they did in the one-dayers and T20s here, but I guess by the end of the Test matches we'll have a better idea of where they're at. We spoke yesterday about how competitive they'll be and we have to be prepared for that.

"We're definitely not taking them for granted or taking them lightly. I guess that's a big part of my job in the next few days, to make sure we don't get too carried away with things and preparing as we would for one of the powerhouse nations in world cricket."

Led by the wicketkeeper Carlton Baugh, the WICB President's XI is dotted with players of Test match ambition and potential, alongside a few experienced heads including Fidel Edwards, Devon Smith and Baugh himself. Johnson Charles and Kieran Powell have the chance to follow up on their appearances in the limited-overs matches, Powell in particular wanting to make a better impression in creams.

"I am very much looking forward to the game," Powell said, having also shrugged off illness since he was dropped from the ODI team following three slim scores. "It is a wonderful opportunity not only for me, but the other players on the team to go out there and do well.

"I have done some technical work with the coaches to help overcome some of the errors I have made, but I was sick over the last week, and did not train too much. I think things have been coming together nicely over the last few days and I believe I am in a much better place now."